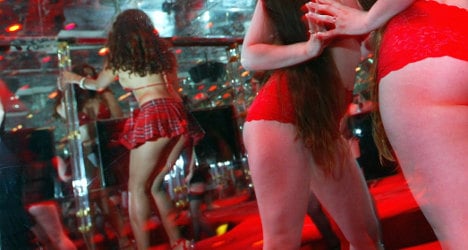 The former IMF head Dominique Strauss-Kahn, who saw his presidential hopes shattered after being arrested on charges of raping a New York City hotel maid in 2011, suffered more sex-related indignities this week.

Infamous French pimp Dominique Alderweireld, widely known as Dodo la Saumure, who has been charged with providing prostitutes to Strauss-Kahn, or DSK as he is known in France, unveiled his new Belgian strip club/brothel this week, the Dodo Sex Klub, or just DSK, named in honor of his alleged former client.

He added: “DSK will employ seven girls, one of whom is transsexual” and will offer “table dances as well as rooms”. Alderweireld himself is awaiting trial in the so-called “Carlton Affair”, on charges of pimping in relation to sordid sex parties in the northern French city of Lille. DSK is also a named defendant in the case and faces his own charges of aggravated pimping. The trial is set for sometime either later this year or in 2015.

Anne Sinclair, a well-respected French journalist who now heads France's Huffington Post website, said: "Listen, you can believe me or not, but I didn’t know.”