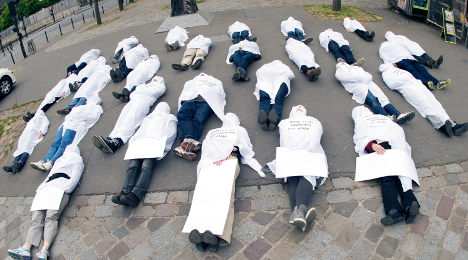 People wear funeral shrouds and lie on the ground as they take part in a protest marking the first anniversary of the Rana Plaza building disaster on April 24, 2014, in Paris. Photo: Lionel Bonaventur

Auchan says it had never placed any orders at the Rana Plaza garment factory in Dhaka which collapsed on April 24 last year after a catastrophic structural failure, leaving 1,000 people dead.

But the three lobby groups, in a complaint filed with a public prosecutor in France, accused Auchun of misleading customers about working conditions overseas and claim that an investigation found labels from the chain's "In Extenso" range in the rubble.

Sherpa, a non profit organisation for the "victims of economic crimes", Peuples Solidaires (People's Solidarity), and the Ethique sur l'etiquette (Ethics on Labels) collective, claim a number of witnesses – including some in Bangladesh – are available to provide evidence, and have called for the prosecutor to carry out a preliminary investigation as soon as possible.

They accuse Auchan of "misleading French consumers on working conditions in the places where its products are manufactured".

The collapse of the eight-storey Rana Plaza killed 1,138 workers and left more than 2,000 injured.

The tragedy, one of the world's worst garment factory disasters, highlighted poor safety and appalling working conditions at the factory

Auchan, which operates in more than a dozen countries and had sales of over 48 billion euros ($66 billion) last year, said it did not wish to comment on a complaint that it had not yet seen.

But in a statement to AFP it said: "We never sent orders to Rana Plaza and there was no direct, or indirect, link between Auchan and the businesses on the site".

The company said it had made "a number of changes" in response to the disaster, including signing an agreement with 158 international companies which aims to improve the safety of textile factory workers in Bangladesh.

It has also launched an action plan against undeclared sub-contracting.

“Naturally this young man, if he is a chess champion, merits that his case be examined with the greatest attention,” Fillon told France Inter radio when asked about the status of 11-year-old Fahim Alam.

Alam arrived illegally in France in October 2008 with his father and in 2010 was issued with an order to leave the country.

He was sheltered for a time by an immigrant help group and currently lodges with families from his chess club in the Paris suburb of Creteil.

Alam won the junior French championship last month and would be able to join the national team in tournaments abroad if he had valid travel documents, according to the French Chess Federation.

Federation official Jordi Lopez said that Alam had the right to join the national team because he met the criterion of being enrolled in a French school.