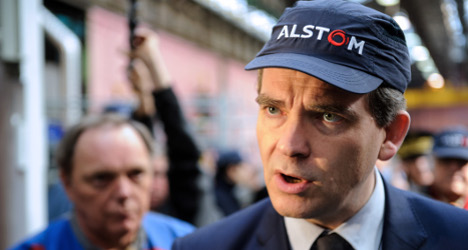 France is worried because French industrial giant Alstom may be bought by a GE. Photo: Sebastian Bozon/AFP

Economy Minister Arnaud Montebourg said on Friday that negotiations to sell French industrial heavyweight Altsom to US-based GE have prompted 'patriotic' worries at the core of the French government, which is seeking alternatives to the deal under discussion.

At stake is Alstom SA, builder of steam turbines for nuclear power plants, which is one of France’s crown industrial jewels. The government has already stepped in to save the company through a 2004 bailout when it was on the brink of financial collapse, Bloomberg reported. Alstom has some 18,000 employees in France alone.

Included in the deal is unit of the company that makes France’s high speed TGV trains, a source of national pride. The idea of the firm falling into foreign hands, as the country battles record unemployment, has rattled leaders.

“The government is working on alternatives and contingencies other than those conceived by Alstom without the knowledge of the government,” Montebourg told French daily Le Monde. “Alstom is a symbol of our industrial power and French ingenuity. In this case, the government expresses a concern and patriotic vigilance (about the talks).”

France has a reputation for making demands in big business deals and has stepped in stop those its sees as bad for the country or its identity. For example in 2005 the country passed an anti-takeover decree that stopped a cold a would-be Pepsico acquisition of Danone.

A sale of Alstom also could raise the possibility of restructuring or job losses, a highly undesirable outcome as France tries to right its moribund economy and bring down unemployment. France is trying to spur growth by cutting taxes and thinning its famous thicket of bureaucracy.

However, should the Alstom deal go through it would be to an American-led corporation that is considered to be heavily French, Le Monde reported. It’s been working in France since 1974, when launched a joint venture with a French aircraft engine maker.

The French wing of the group — led by Frenchwoman Clara Gaymard — employs some 11,000 workers and has it European headquarters in France.