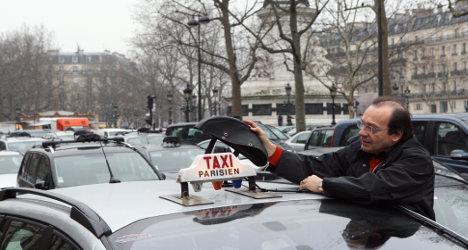 The proposed changes to end France's so-called taxi wars will mean tighter regulations imposed on the private hire cars, known as VTCs and a modernizing boost for traditional taxis.

The bitter feud arose as traditional taxi drivers revolted against what they see as unfair competition from private hire car firms like Uber.

With taxi unions having threatened more wild cat taxi strikes, the likes of which caused havoc on the streets of Paris last month, Socialist MP Thomas Thévenoud was tasked by France's former Prime Minister Jean-Marc Ayrault with coming up with a set of solutions to end the row.

On Thursday he was due to turn in his report which he hopes will appease both sides and prevent any further feuding.

Here are some of the chief proposals that were leaked to the press:

End of delay: The lawmaker proposes ditching the contested 15-minute delay before VTC's can pick up a client as well as dropping a rule for the minimum length of their trip. Thévenoud sees the limit as an infringement on the freedom of the market.

The 15 minute delay was put into place in December 2013 as means to protect the traditional bread and butter market for cabbies, the on-street pick up. However France’s top administrative law authority, the Conseil d’Etat, threw the rule out in February after deeming it unfair.

More regulation for VTCs: Private hire car drivers would have to undergo training and put their cars through an inspection every six months. They would also need to be licensed at the regional level in an effort to guarantee they have the proper insurance. Under the proposal they’d also be forced to post their journey rates clearly inside the car.

Minimum charges for taxis: Based on feedback from taxi users, Thévenoud has proposed a flat minimum charge for taxis of €6.86. Presently if a passenger orders a taxi by phone the meter starts running when the driver is dispatched.

Flat rate for airport trips: Taxis tend to bunch up at Paris’s airports because those trips usually result in longer rides and a bigger fee. In order to force some of the cabs to stay in town, Thévenoud wants to create a single, flat rate for an airport run.

Bank cards have to be accepted : Under the reforms all taxis would have to be equipped to accept bank cards. Many taxis accept plastic already, but there is nothing that guarantees a passenger can pay without cash in hand.

One colour for taxis: Under Thévenoud's vision of taxis as “an alternative to a personal car” the taxi infrastructure at train stations, airports and on urban roads needs to be improved for cabbies. The cars, which now can be any colour, should be required to all bear the same “sober” paint job to make them easier to identify.

No more GPS: In what could provoke an angry response from companies like Uber, the lawmaker wants to ban VTC companies from making use of smartphone apps that allow clients to check where available vehicles are located. This ability is one of the core functionalities of ride-share services.

Whether these changes will be enough to pacify those taxi drivers who have been threatening strikes remains to be seen.

The root of their anger stems from the what they claim are unfair conditions of trade. They point to the fact that drivers can spend hundreds of thousands of euros on state-required licenses, training and insurance, while VTCs face few requirements before they operate. Cabbies have framed the struggle as a battle for their livelihood.

Nadine Annet from France's biggest taxi drivers union summed up their grievances in an interview with The Local earlier this year.

“To get set up as a self-employed taxi driver in Paris, you have to figure on spending about €150,000,” she said. “There is training, the licenses, the car. But for the VTCs there is simply the cost of the car, and lord knows what kind of car it may be.”

To read more of what she had to say click on the link below.

SEE ALSO: Paris taxi wars: 'Not all cabies are rude' Whether these changes will be enough to pacify those taxi drivers who have been threatening strikes remains to be seen.

The root of their anger stems from the what they claim are unfair conditions of trade. They point to the fact that drivers can spend hundreds of thousands of euros on state-required licenses, training and insurance, while VTCs face few requirements before they operate. Cabbies have framed the struggle as a battle for their livelihood.

For their part proponents of the VTCs point out they fill a void in French taxi service.

The cost of taxi fares is currently governed by pricing rules that some passengers consider outrageous. A common complaint among members of the public in France, especially in Paris, is that there never seems to be any free taxis on weekend evenings, despite the fact there are some 20,000 cabs in Paris.