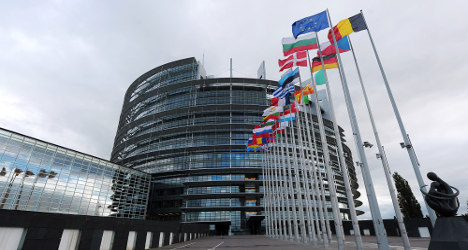 While Britain’s right-wing UKIP party leadership recently rejected an invitation from Marine Le Pen to join forces with her National Front, many other far-right parties around Europe seem only too glad to accept her advances.

Le Pen hopes that together she and her like-minded European allies can win enough seats in May's European elections to create a far-right voting block that will unlock parliamentary political clout as well as European funding for their parties and give her the opportunity to wreck the EU from within.

Earlier this year Le Pen made her feelings for the EU clear, saying she wanted to see it "explode"

"How to improve the European Union? By making it collapse…. I expect one thing only from the European system and that's for it to explode," Marine Le Pen told journalists in January.

Under EU rules a coalition must include at least 25 deputies drawn from a quarter of  EU nations, which would be seven different countries.

If the National Front and its allies pull it off they'll gain the power to propose legislative amendments and collect party funding. Riding the momentum of their historic local election victory in March, some polls have predicted the National Front could emerge as the leading party with as much as 24 percent of the vote.

The European-wide resurgence of the right and a wave of euroscepticism look set to help the party continue its efforts to make itself palatable to a larger pool of voters, Nonna Mayer, Research Director at the Centre of European Studies at Sciences Po in Paris, told The Local on Thursday.

"They are part of the new wave of parties that are trying to change their image, avoid making anti-Semetic comments and show that they compatible with democracy," she said. "I mean it's public relations, it's a change of image. They are still anti-immigrant and xenophobic."

A recent poll projected the alliance could pull in 38 seats and thus some €2.4 million in EU funding. But due to the rebuff from UKIP's Nigel Farage, who said the National Front was too tainted by anti-Semitism, the bloc remains one crucial ally short of its target of seven.

"Yes, you could say they are still shopping for another member," said Mayer, who noted there had been rumours a Slovenian party was interested in joining forces.

Here's a look at the European parties who look set to form an alliance with the National Front:

The Netherlands’ Freedom Party: The PVV, as its known in the Netherlands, is led by Geert Wilders, who has made a name for himself as a virulent critic of Muslims. Wilders is Le Pen’s co-leader in the effort to create an alliance. In 2008 he told French daily Le Figaro: “I’ll say it in the clearest manner: my culture is better than Islamic culture. We don’t treat women, homosexuals and political relations like this backward culture does.”

Northern League Party: A prominent leader of this Italian anti-immigrant party was in the headlines last year when he compared Italy’s first black government minister to an ape. Senator Roberto Calderoli faced a probe after he said seeing immigration minister Cecile Kyenge made him think of  “an orangutan”. The party is best known as an agitator for Italy’s wealthier, northern areas to become independent.

Freedom Party of Austria: This party has long been tied to Nazi-sympathizing sentiments and statements. One of the most recent examples came in October 2013 when party members wore cornflowers to that year's opening session of parliament. While they swore it was to commemorate an 1848 liberal movement, it was also the flower worn by Nazi lawmakers in Austria until 1933. Prior to then their symbol, the swastika, was banned from being worn in parliament.

Vlaams Belang: This Belgian separatist party, in addition to being anti-immigrant and anti-Islam, also argues tirelessly for the independence of the Flemish-speaking part of Belgium. The group supports the total outlawing of the French language on Flemish territory. Ironically, Le Pen speaks French, but not Flemish.

Sweden Democrats: This party is probably the least well-known of the National Front allies, but it has a fairly similar platform of anti-immigration, anti-Islam ideas. Back in 2010 a video emerged of three of its members launching on a drunken, racial epithet-laced tirade in a public place. They singled out a comedian with Kurdish origins, saying “stop pissing off the Swedish with your provocations.” The rise in popularity of many of these parties and the possibility they could create a destructive voting block in the European parliament is clearly a major concern to EU leaders.

"I am vehemently calling on Europeans to step out of the comfort zone, to quit their silence, to not always let extremes make their move, to have – in France too – the courage to defend Europe," EU Commission President Jose Manuel Barroso  told AFP in December.

Most polls suggest his calls are falling on deaf ears.