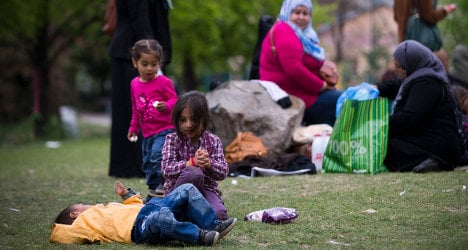 They ended up there penniless after wandering from country to country for months.

Yahya, Aziz and 150 other Syrians swapped the brutality and death of a war zone for hand-to-mouth survival in a small park in a working-class suburb of Paris, squeezed in behind a hotel just a few metres away from a busy ring road.

Some come from Homs, others from Aleppo or the Syrian port city of Latakia, leaving behind the violence of a three-year conflict that has now claimed more than 150,000 lives and forced around half the population to flee their homes.

"We stay here all day. At night, some manage to get hotel rooms paid for, others sleep in cars or at the mosque," says Yahya, a former dental technician from the central city of Homs who speaks French fluently, pointing to refugees lying down on mattresses in the park in Saint-Ouen.

The 44-year-old, who refuses to give his surname, "abandoned everything" along with his wife and children after Syria erupted into violence in 2011, leaving behind a pretty villa and relinquishing any hope of returning.

Lebanon, Algeria, Egypt, back to Algeria, Morocco, Spain and finally France: "We knocked on every door," he says, grey hair cut short, black jumper worn out.

It's a similar story for Aziz, 54, who left Syria at the end of 2012 with his six children and wife.

The family criss-crossed Europe before ending up in the park, which has become his "headquarters."

"I also lived in Homs, in the Baba Amr neighbourhood (a rebel area besieged by the army). Everything has been destroyed there," Aziz says.

During their first few weeks in France, the family slept in a hotel. But for several days now, they have been camping out in a car.

Yahya and Aziz are but drops in the ocean of Syrians fleeing their ravaged country.

According to the UN High Commissioner for Refugees (UNHCR), at least 2.6 million Syrians have registered as refugees in neighbouring countries in the Middle East, many of them in tiny Lebanon which is staggering under the weight of the crisis.

By contrast, Amnesty International said late last year that just 55,000 Syrian refugees had managed to get to what it called "Fortress Europe" and claim asylum in the EU, many heading for Germany or Sweden.

For its part, France has taken in around 3,000 Syrian refugees since the beginning of the conflict.

In Saint-Ouen, residents and activists have come to the help of Yahya, Aziz and the others, raising funds to pay for hotel rooms and collecting clothes and medicine.

"They're living day-to-day, in diabolical conditions. They have a few blankets, that's all," says Khadija Bouehetta, a local resident.

The first Syrians arrived at the park in January but, as word spread and temperatures grew more mild, their numbers have grown since the start of April.

Local officials said they would send a team to the site this week to help them put together asylum requests, needed to try to get the refugees basic services such as housing and health care.

In the meantime, volunteers have set up a table not far from the refugees where they serve food. A line forms, women and children first.

"We bring them food every day. Today it's couscous," says Bouehetta, who worries about the sanitary conditions on the square, "especially for the children."

Among the refugees, several have health problems, including Nawal Alsafar who suffers from a skin disease and whose two-year-old son, born without hands, is feverish.

"I arrived a few days ago, I don't know anyone," the mother says via an interpreter.

Last week three pregnant women were taken to hospital following a visit to the square by a doctor.

NGOs and France's Green party are urging authorities to do more to help the families while they wait for their asylum requests to be processed.

So far their appeals have fallen on deaf ears but Yahya says he still has hope.

"We must start again from scratch, we lost everything. But we Syrians work hard. I have confidence in France."