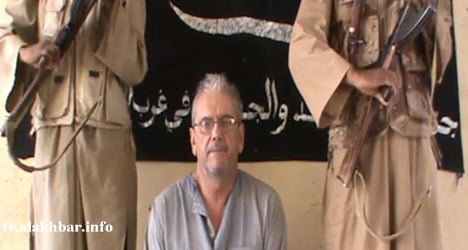 French citizen Gilberto Rodriguez Leal sitting between two armed guards in an undisclosed place. A jihadist group in Mali on April 22, 2014 announced the death of the French hostage. Photo: AFP

One of Mali's top jihadist groups said on Tuesday a French hostage it had kidnapped in November 2012 was dead.

The Movement for Oneness and Jihad in West Africa (MUJAO), a splinter group of Al-Qaeda's regional branch, told AFP Gilberto Rodrigues Leal "is dead, because France is our enemy".

Yoro Abdoul Salam, a spokesman for the group, gave no details on the date or circumstances of Rodrigues Leal's death during a brief telephone exchange.

Pressed for evidence in the absence of any pictures or video footage of Rodrigues Leal's body, he said that "in the name of Allah, he is dead", before hanging up.

Last week another MUJAO official warned of "the end of life" for the 62-year-old hostage in a short message from a Malian mobile phone sent to AFP.

"France will do everything to find the truth about what happened to Gilberto Rodrigues Leal and will not let it go unpunished," French President Francois Hollande said in a statement.

"There is every reason to believe that our compatriot died several weeks ago because of the conditions in which he was being held."

French foreign ministry spokesman Romain Nadal said the government had feared for Rodrigues Leal's safety for months and had informed his family that he may be dead in December 2013.

"We condemn in the strongest terms the actions of this terrorist group," he said in a statement.

The announcement came two days after French Foreign Minister Laurent Fabius said he was "extremely worried" about the safety of the 62-year-old.

"We haven't had any news for a long time. We are in contact with the family but we are extremely worried," he said.

Rodrigues Leal was kidnapped on November 20, 2012 by armed men near the western town of Kayes as he was driving a camper van from Mauritania.

MUJAO is one of several Islamist groups that occupied the vast desert north of Mali along with Tuareg separatist rebels in 2012, in the wake of a military coup.

The Islamists later routed the Tuareg and began an advance on Bamako that led to a military intervention by former colonial power France in January 2013.

Tension across the north

French troops pushed the Al-Qaeda-linked militants out of northern towns early last year and have kept up operations against residual groups of insurgents.

France is winding down its force from a peak of around 5,000 soldiers but is to keep 1,000 troops in Mali beyond the spring.

The UN peacekeepers took over security in July last year from a pan-African military mission which had been supporting the French troops.

The announcement of Rodrigues Leal's death comes against the backdrop of tension across the north, where MUJAO and other Islamist militias are regrouping, according to security sources.

The five went missing along with their four-by-four vehicle on the roads between the towns of Kidal and Gao while working in the region.

Defence Minister Jean-Yves Le Drian said last month French soldiers had killed about 40 Islamist fighters, including some senior commanders, in Mali over a number of weeks.

They included Omar Ould Hamaha, a commander of MUJAO and Al-Qaeda in the Islamic Maghreb known by the nom-de-guerre "Red Beard".

Hamaha was implicated in the April 2012 abduction of Algerian diplomats in Gao, Mali's largest northern city, also claimed by MUJAO.