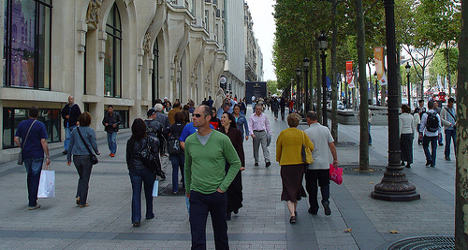 Visitors to France should be allowed to shop till they drop seven days a week, the country's Foreign Minister said on Tuesday, weighing into a fierce debate over restrictions on Sunday trading.

Fabius, who now handles the trade and tourism portfolios following a government reshuffle, added: "The tourist who comes on a Sunday and goes to a store that is shut is not going to come back on Thursday.

"For tourists, shops must be open (on Sundays)," he added, saying workers would be duly compensated.

Retailers in France can only open on a Sunday under very specific conditions – if they are located in a tourist or a high-density area. Any shop selling food, such as a butcher, can operate until 1 pm.

Some politicians on the right have criticised the rigid rules around Sunday shopping claiming they are harming the French economy, especially in Paris.

Nathalie Kosciusko-Morizet, the former candidate for Paris mayor from the centre-right opposition UMP party, said the measures were causing huge losses in one of the world's most-visited cities.

"The employees want to work and businesses make at least 20 percent of their weekly turnover on this day," she said in an interview to Metro News, a freesheet.

"We have to keep this economic manna in the capital," she said. "Take into account the fact that tour operators are organising an exodus of tourists (from Paris) to London on Sunday so that they can do their shopping.

The issue is part of a broader debate about France's competitiveness and a perceived lack of flexibility in its labour market which some say hinders job creation.

Union representatives were critical of Fabius's wading into the debate, but the French Trade Council, which represents retailers employing 3.5 million people, welcomed the minister's comments.

"It is distressing to see tour operators organising departures from Paris on a Saturday evening to go to neighbouring, more open countries, thereby depriving France of significant sales and the associated jobs," said the council's president, Gerard Atlan.

With many visitors from outside Europe taking in both cities on short trips, Paris is particularly vulnerable to competition from London, where most shops are open for at least six hours on Sundays.

But Joseph Thouvenel of the CFTC union underlined that big department stores were already authorised to open on Sunday in tourist areas and warned that a general liberalisation would destroy at least as many jobs as it created.

"It is France's history, its traditions and its art of living that have made it the number one tourist destination in the world," Thouvenel said.

Recent court rulings also forced some flagship stores on the Champs Elysees in Paris to close their doors at night.

The rulings were the result of legal action taken by trade unions in defence of the principle that late night opening hours should be the exception and not the rule.

But they infuriated those employees who want the extra hours to earn more money.

A parallel legal battle over the right of DIY stores to open on Sunday was resolved by the Socialist government deciding to allow them to keep doing so until mid-2015, to allow time for a revamp of the law.

The results of a poll published on Tuesday also suggested many French workers would be willing to work on Sundays if they were paid cash.

In the survey by OpinionWay respondents were asked “What would you be prepared to do to earn more…?”

Only ten percent of respondents said they would be accept less holidays to boost their packets.