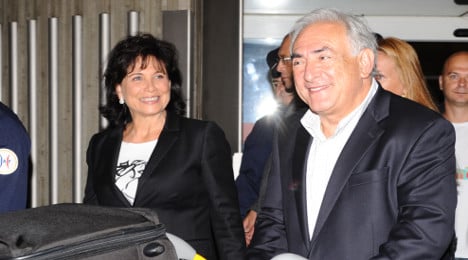 Three years after Strauss-Kahn's tumble into disgrace with his arrest for rape in New York City, his ex-wife, journalist Anne Sinclair, has given her first ever in-depth interview on what she knew, or more to the point didn't know, about his notorious infidelity, saying she’d only heard the rumours, but didn’t believe them.

Sinclair, a wealthy heiress who was until recently one of France's best-known television news anchors, left Strauss-Kahn after he was forced to resign as head of the International Monetary Fund following his 2011 arrest for an alleged sexual assault on a New York hotel maid.

Elements of her interview, which is set to be broadcast on Tuesday night, were leaked to the French press.

“I had doubts, yes, doubts that every couple has,” she told France TV in the exclusive interview. “I would often, sometimes, go to him, ask him if things were true or not."

When Sinclair's interviewer, Laurent Delahousse, pressed her on the subject, Sinclair, who now heads France's Huffington Post website, said: "listen, you can believe me or not, but I didn’t know.”

Sinclair, who has rarely spoken publicly about the affair, added: "When I married Dominique, I knew he was a charmer, that he was a seducer. That much I knew," she said.

But when it came to the rumours, Strauss-Khan “knew how to deny and reassure (her)," she said.

Rumours are made to destroy, to kill, to damage – so I ignored them," she says.

She went on to add that she never believed the claims of Nafissatou Diallo, the New York City hotel maid who’s allegations led to Strauss-Kahn’s arrest and his resignation from his job as the head of the International Monetary Fund.

Diallo said the one-time French presidential hopeful emerged naked from the bathroom of the hotel suite she was cleaning and forced her to perform oral sex. Strauss-Kahn said the act was consensual.

The IMF managing director was detained on a plane at John F. Kennedy airport and was held for several days at New York's tough Rikers Island jail. He soon had to resign from his post at the global lender.

In August 2011, prosecutors dropped criminal charges, declaring that Diallo was not a credible witness. Strauss-Kahn quickly returned to France even though the maid maintained a civil suit, which was later settled for an undisclosed sum that was assumed to be worth several millions of dollars.

The sordid affair opened up a can of worms with French prosecutors subsequently launching several separate investigations as the lid came off the high-flier's covert but rampant appetite for extra-marital sex.

Young French author Tristane Banon accused him of trying to rape her in 2003. Investigators concluded that while there was evidence of sexual assault, the alleged attack had occurred too long ago to be prosecuted.

Another probe heard a claim that Strauss-Kahn had taken part in the gang rape of a Belgian prostitute. It was eventually dropped when she recanted and said she had consented to sex.

The scandals buried Strauss-Kahn's hopes of claiming what many had thought would be a strong Socialist candidacy for the French presidency in 2012.

The most serious probe into his sex-life however is still ongoing and has resulted in Strauss-Kahn being hit with pimping charges along in connection with an alleged prostitution ring at a Lille hotel.

The charges relate to a case, known in France as the "Carlton affair",and centres around allegations that business leaders and police officials in Lille operated a vice ring supplying girls for sex parties, some of which are said to have taken place at the city's Carlton Hotel.

DSK has not denied taking part in these sex parties, but claimed he had no idea that the women who took part were prostitutes.

The case is set to go to trial at some point later in the year or in 2015.

Whilst awaiting trial, Strauss-Kahn has found work as an advisor to the Serbian government and the story of his spectacular fall from grace has been made into a film, "Welcome to New York", starring Gérard Depardieu.