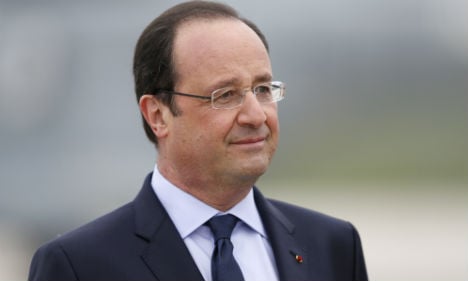 "We have a few elements of information but I do not have the proof," Hollande said in a radio interview after he was asked about reports that Assad was currently using chemical weapons.

"What I do know is what we have seen from this regime is the horrific methods it is capable of using and the rejection of any political transition," he told the Europe 1 radio station.

French Foreign Minister Laurent Fabius told the same radio station there were "indications, which have yet to be verified, that there have been recent chemical attacks".

He said they were "much less significant than those in Damascus a few months ago but very deadly", and had taken place in the northwest of the country, near the Lebanese border.

A French source close to the matter told AFP that the reports "had come from different sources, including the Syrian opposition."

There are conflicting accounts about one attack that happened in the town of Kafr Zita in the central Hama province earlier in April, with both the government and the opposition accusing each other of being responsible.

Activists in the area accused the regime of using chlorine gas, saying it caused "more than 100 cases of suffocation."

Videos circulated by opposition activists on YouTube showed men and children in a field hospital coughing and showing symptoms of suffocation.

But state television blamed the Al-Qaeda-affiliated Al-Nusra Front, a key force in Syria's three-year armed revolt, for the attack, which it said had lead to the death of two people and caused more than 100 to suffer from suffocation.

Under the terms of the US-Russia brokered deal reached last year, Syria has until the end of June to destroy its chemical weapon stockpile if it wants to ward off the threat of US air strikes.

The agreement was reached after a deadly chemical attack outside Damascus last August that the West blamed on Assad's regime.

Last week the Organisation for the Prohibition of Chemical Weapons (OPCW), the global chemical watchdog, said Syria had surrendered almost two-thirds of its chemical weapons, including many priority chemicals.

Speaking on April 14 after Syria had completed its latest shipment, the OPCW chief Ahmed Uzumcu said "both the frequency and the volumes of deliveries have to increase significantly" if the deadline was to be met.

Norwegian as well as Danish naval vessels are involved in the process of removing chemical materials from the port of Latakia in western Syria.

The most dangerous are being transferred to a US Navy vessel specially fitted with equipment to destroy the chemicals at sea.