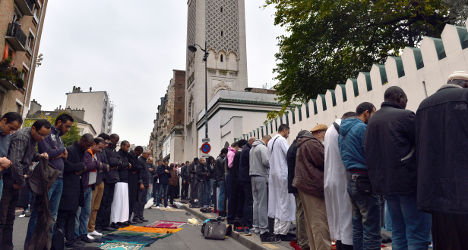 A mosque in the Paris suburbs has gotten a threat tied to the recent election of far-right National Front mayor. Photo: Miguel Medina/AFP

A mosque in the Paris suburbs said on Friday it had filed a complaint with police after slices of pork paté and a threatening letter were stuffed into its mailbox.

Authorities at the mosque in Mantes-la-Ville, a town of 19,000 in the western suburbs of Paris, said the incidents reflected a "worrying climate" after the town last month elected a mayor from the far-right National Front.

The head of the association that runs the mosque, Abdelaziz El Jaouhari, said about a dozen mouldy slices of pork paté were discovered in the mailbox on Wednesday.

The next day, an anonymous letter arrived calling Muslims "cockroaches" and wishing "good luck" to the new mayor "because he has a lot of work to do for a good cleansing, in particular of the Muslim race".

"There is no question this was a racist and provocative act. It is the first time in the 12 years of the mosque's existence that it has been the target of this kind of racist attack," the association said in a statement.

It said it had filed a criminal complaint for "provoking racial hatred or religious discrimination" with police.

The association said the incidents were "especially worrying" given the "worsening social and political context" in the town after the election of FN candidate Cyril Nauth in last month's municipal elections.

Nauth won the town with 30 percent of the vote, becoming the only elected mayor from the FN in the Ile-de-France region that encompasses the French capital and its suburbs.