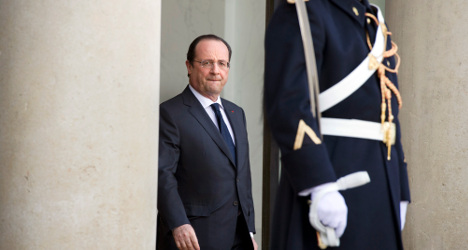 A close advisor to Francois Hollande resigned on Friday after allegations about a conflict of interest and his extravagant lifestyle dealt a fresh blow to the beleaguered French president.

In a statement to AFP, senior political advisor Aquilino Morelle, 51, said he was stepping down but denied any wrongdoing in a scandal that has put the spotlight on his collection of 30 pairs of bespoke shoes.

"I have decided to put an end to my duties as an advisor to the presidency of the republic… to be entirely free to respond to these attacks," Morelle said.

Hollande, who is sensitive to allegations that he is part of what the French refer to as the "caviar left", said his advisor had made "the only appropriate decision" in the circumstances.

"It is for him and him only to respond to questions relating to what he did previously," Hollande said. "He showed he understood that by offering his resignation and I immediately accepted it."

Hollande also admitted, for the first time, that his failure to curb the rise in unemployment could rule him out of being a candidate for re-election in 2017.

"If unemployment does not fall by 2017, I have either no reason to be a candidate or no chance of being re-elected," Hollande said during a lunch with staff at a Michelin plant in central France.

Morelle had been under pressure after allegations from investigative website Mediapart that he breached ethical guidelines for public servants by doing work for pharmaceutical companies in 2007, while he was a senior official in the ministry for social affairs.

Concerns had also been raised about Morelle's alleged extravagance at the presidential Elysee Palace, at a time when Hollande's government is asking French voters to accept spending cuts to rein in the country's deficit.

Mediapart reported that Morelle, the head of Hollande's communications operation, kept 30 pairs of hand-made shoes at the Elysee which were professionally polished every two months.

The advisor's taste for the best things in life also reportedly led to him regularly raiding the palace's celebrated wine cellar for coveted bottles to accompany routine working lunches.

Morelle has not contested the accuracy of the shoes revelation and has also confirmed Mediapart's claim that the two chauffeurs at his disposal were sometimes tasked with picking up his son from school, citing his "extremely busy schedule".

He denied the conflict of interest charges but it emerged Friday that he had not received the authorisation he should have asked for before working for the pharma companies.

The scandal is deeply embarrassing for Hollande, who is struggling with the worst approval ratings of any French leader in modern times.

Following his 2012 election, Hollande vowed that he would run a government that was ethically beyond reproach.

But that ambition was dealt a major blow last year when he was forced to sack Jerome Cahuzac after it was revealed that the then-budget minister, whose responsibilities included combatting tax evasion, had a secret Swiss bank account.

Media commentators suggested Friday it was no coincidence that the revelations about Morelle emerged in a week that has seen the ruling Socialist Party hit by divisions over Valls's announcement of €50 billion ($69 billion) of cuts in state spending over the next three years.

The inclusion in the programme of a freeze on a wide range of welfare benefits has infuriated the party's left-wing and some deputies are threatening to vote against the government when the first legislation related to the cuts programme comes before parliament on April 29.

Morelle was seen as a supporter of Valls but sources close to the new premier said Friday that he had advised the advisor to quit quickly.