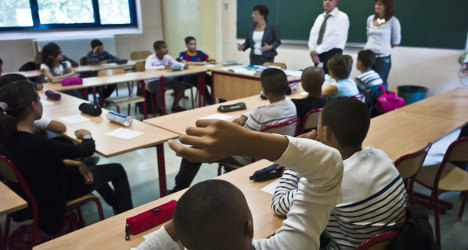 French national education authorities have launched a probe at the private Gerson religious school in Paris after students there reported they were told women who use the morning-after pill are “semi-murderers” and abortion is “murder”.

Representatives from the pro-life group Alliance Vita, which has close ties to French anti-gay marriage group Manif Pour Tous, made the statements during a presentation in a class on contraception at the campus in the wealthy 16th arrondissement, French daily Le Monde reported this week.

"We've had no feedback from parents or teachers. The knowledge that families were offended by certain comments reached us via the media,” an unnamed education official told French daily Le Figaro.

Pupils upset by the presentation were cited this week in a Europe 1 radio report on alleged “fundamentalist” activities at the school, which then prompted the probe.

Alliance Vita, which shares a spokesperson with anti-gay marriage Manif Pour Tous organisation, vehemently denied making the statements by saying the claims were “lies, slander and cowardly attacks intended to tarnish its image and discredit its work.”

In a statement Alliance Vita said it was going to file defamation charges over the allegations.

The statement added: “Alliance Vita is regularly invited to speak, officially and with everyone’s knowledge, in schools about subjects that concern bio-ethics, pregnancy and birth.”

Officials from the school confirmed Alliance Vita’s presentation, but pointed it was made early in the morning and it was open to, but not mandatory for, last year high school students, Le Figaro reported. Other groups have carried out “human and religious training” during the same kinds of presentations, the school said.

The investigation comes at a tense time at the school, which the teachers' union alleging that the institution is being taken over by members of the extreme, conservative Opus Dei movement.

The union of private Catholic educators FEP-CFDT voiced concerns over the school’s alleged drift toward fundamentalism.

"Many teachers have complained of harassment" and scores have asked to be transferred, the union’s General Secretary Valerie Ginet told Le Figaro.

"Clearly, there are those who want to make this school an Opus Dei facility and seek to get rid of those who would oppose it," Ginet said.

The school’s headmaster downplayed concerns over Opus Dei’s influence on the campus.

Not surprisingly it turned out to be simple scaremongering, but it sparked a national controversy about the teaching of so-called ‘gender theory’ in schools. In claims that since have been discredited, conservatives alleged schools were teaching children that gender was not determined by birth.