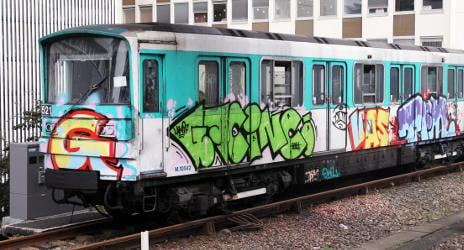 Normally visitors to Paris are happy with a picture of themselves in front of the Eiffel Tower or attaching a love lock to the Pont des Arts, but not two graffiti-enthusiasts from Australia.

The pair were arrested by police this week suspected of tagging Metro carriages and trains in Paris, during their holiday. They caused damage in the region of €8,000, 20 Minutes reported.

According to police sources the pair, aged 36 and 28, were intent on turning their InterRail trip around Europe into a graffiti holiday and planned to target other cities across the continent.

In their hotel room police found around 20 cans of spray paint as well as digital photos of their work.

One police source told French media, “they planned to tag the whole of Europe”.

It was not clear where they were planning to head to after Paris, but it seems French authorities have saved their European counterparts a fair amount of money by picking up the pair before they could do any more damage.

The pair appeared in court on Wednesday and their case was immediately transferred to a criminal court.