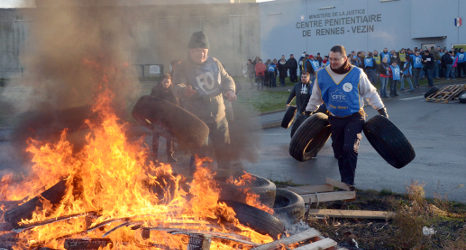 France's penal system has won the dubious distinction of having the most people in its prisons ever, soundly squashing the previous record high set just nine months before.

As of April 1st France’s total prisoner population stood at 68,859, which beat by 290 people the record of 68,569 set on July 1, 2013, according to statistics released on Thursday by the penal authority.

With an operational capacity set at 57,860 prisoners as of March, the new figures mean France’s prisons are holding nearly 20 percent more people than they are are made for.

The bursting jails drew harsh words from the country's prison guard unions on Thursday, who already already protested the situation in the summer of 2013 by blocking deliveries and assembling in front of their work sites.

"We are worn out, our people are tired from the daily influx," guards' union SNDP-CFDT wrote in a statement. "We can't properly do our jobs…and we want the nation to know it."

The editor-in-chief of publications at prison watchdog group Observatoire International des Prisons France, Barbara Liaras, told The Local the problem is the country's sentencing laws that she believes are in urgent need of reform.

Why are France’s prison so overcrowded?

“Several recent measures contributed to there being more people in prison and those laws are still on the books. One is mandatory minimum sentences. There have been several studies which show that this law directly contributed to an increase in the number of people sent to prison.”

“There were also new programs to lengthen prison sentences for repeat offenders. Not to the point of three strikes in the United States, but the same idea.”

(In American states that have "three strikes" laws, prisoners can be put away for life after their third conviction for a serious or violent crime.)

“On top of that there are measures that made it more difficult to use alternatives to shorten long sentences, such as conditional release and house arrest. Those are both ways to complete a part of one’s sentence outside prison.”

“‘Immediate appearances’ also came into use. These are when people are arrested by police and then go immediately before a judge. It’s faster. The stated objective was to respond more quickly to minor crime and to have faster procedures unclog, in a manner of speaking, the justice system.”

“But with reports that are not as well researched, much information about the defendants is unknown because the police don’t have the time to look into the person’s background. This policy has also resulted in many more mentally ill people being in prison.”

Whose fault is it?

“These penal policies were put in place during the Nicholas Sarkozy years–that is to say from when he was interior minister to his presidency — and are still entirely in place.”

“His penal policies sought to respond to a crime by putting people in prison. He and a group of conservative lawmakers are behind these policies that strongly favor an approach that is tough on crime and believes that prison is solution.”

What’s the impact of these policies?

“The result is that France’s prisons are exploding and they continue to fill up. It’s a harder life for inmates and more complicate work conditions for the personnel.”

“The first consequence is that prisoners cells are overcrowded. They are in a nine metre-square cells, which is the standard size for one person in France,  but now there are two or three people inside. In some cases their mattresses are on the floor.”

“The work conditions for prison guards have become impossible. When the prison is overpopulated there is more tension and more violence. They spend their days running from one end of the prison to the other. They have no time to spend making sure things are going well among the inmates.”

“In these conditions it is impossible to help the people to get ready for their release back into the world. The battle against repeat offending is completely ineffective."

What needs to be done?

"We must change these laws as fast as possible, do a real penal reform in order to reorient our response to crime. We have to also increase the number of probation officers, so that they can really supervise their cases and thus France can release the large number of people who incarcerated for a short sentence."

"Eighty percent of the inmates in France spend less than a year in prison. All of these people could be better taken care of in the community. The average sentence now is less than 10 months."