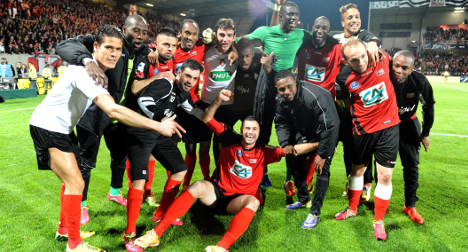 Guingamp players celebrate after their victory over Monaco on Wednesday which sets up an all Breton French cup final against Rennes. Photo: Fred Tanneau/AFP

Ligue 1 strugglers Guingamp beat much-fancied Monaco 3-1 after extra time in the semi-finals of the French Cup on Wednesday to set up a final date with Brittany rivals Rennes.

Mustapha Yatabare's opener was cancelled out by Dimitar Berbatov as the match at a packed Stade du Roudourou finished 1-1 after 90 minutes, but goals by Fatih Atik and Yatabare again in the second period of extra time clinched a famous win for the home side.

Guingamp will now meet Rennes at the Stade de France on Saturday, May 3 in a rerun of the 2009 final, which a Guingamp side then in the second tier won 2-1.

Meanwhile, the defeat will do little to help Monaco coach Claudio Ranieri's prospects of staying in the job beyond the summer at a time when his future is the subject of much speculation.

The principality club's billionaire majority shareholder Dmitry Rybolovlev was in attendance at the Stade du Roudourou hoping to see the tournament favourites keep alive their chances of winning major silverware for the first time since their League Cup triumph in 2003.

However, it was Guingamp, who remain in danger of relegation from Ligue 1 having lost their last four matches, who got off to a dream start, taking the lead inside six minutes.

Argentine number one Sergio Romero has only really been given his chance to impress in the Cups this season and he was once again selected by Ranieri here, but he was too slow in coming to collect a Steeven Langil free-kick and Yatabare pounced to score.

Monaco slowly grew into the game, though, and they drew level nine minutes before the interval, Berbatov applying the finish to a low cross by Fabinho.

However, Guingamp were the better team and they were unlucky not to win the match in the 90 minutes, with substitute Ladislas Douniama seeing a superb strike touched onto the bar by Romero before the referee dismissed loud appeals for a penalty in injury time when Ricardo Carvalho appeared to handle inside the box.

They were not to be denied in extra time, though, with the unmarked Atik netting the crucial second goal in the 112th minute.

Romero got a touch to Atik's first-time effort from a Thibault Giresse left-wing cross, but he could not keep it out, and there was nothing the goalkeeper could do when the hosts broke forward and Giresse set up Mali striker Yatabare to score his second of the game, and 18th of the season, with three minutes of extra time left.

Rennes, who have not won a major trophy in more than four decades, beat Ligue 2 club Angers 3-2 in the first semi-final on Tuesday, coming from behind to win thanks to goals by Ola Toivonen, Kamil Grosicki and Jean II Makoun.