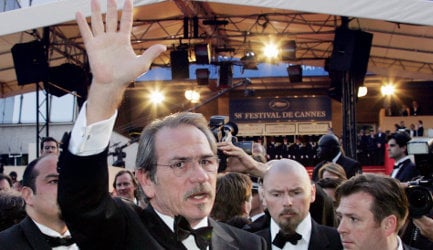 British and American directors have been selected to show their films in Cannes. Photo: Gerard Julien/AFP

Movies by David Cronenberg, Jean-Luc Godard, Mike Leigh and Ken Loach are among the films selected to compete for the top Palme d'Or prize at next month's Cannes Film Festival, organizers said on Thursday.

Just 18 films of the more than 1,700 submitted have been rewarded with a slot in the competition shortlist, which was unveiled in Paris by festival artistic director Thierry Fremaux.

Cronenberg's "Maps to the Stars", Godard's "Adieu au Langage", Leigh's "Mr. Turner" and Loach's "Jimmy's Hall" will all be in competition at the May 14-25 movie extravaganza on the French Riviera.

Other films in competition include "The Homesman" by Tommy Lee Jones, "The Search" by Michel Hazanavicius, "Captives" by Atom Egoyan, "Saint Laurent" by Bertrand Bonello, "Sils Maria" by Olivier Assayas and "Deux jours, une nuit" by the Dardenne brothers.

Held almost every year since 1946, the festival is famed as much for launching the careers of filmmakers such as Steven Soderbergh and Quentin Tarantino as for its glitzy red carpet photo calls, luxury yachts, star-studded parties and diamond heists.

And behind the scenes film industry executives and producers turn the festival into a huge marketplace as they cut deals to secure a share in the next big movie event.

Also included in the viewing line up are "Grace of Monaco", starring Nicole Kidman as the former Hollywood star Grace Kelly, will open the festival on May 14, while "Party Girl", a French film about an ageing night club hostess, will open the "Un Certain Regard" new talent section.

Even before its release, the royal biopic has been making headlines with the film likely to be boycotted by Grace's children Prince Albert and Princesses Caroline and Stephanie who have dismissed it as a work of "pure fiction".

Based around the late Prince Rainier, played by British actor Tim Roth, and Grace, who died in a car crash in 1982, it tracks events at a time when France was threatening to annex the tiny principality on its southern coast.

A disagreement between the film's French director Olivier Dahan and American producer Harvey Weinstein over the editing of the movie, meanwhile, has resulted in rival versions being made.

"There are two versions of the film – mine and his – which I find catastrophic," the director said earlier.

The row leaves open the question of which man's movie will be shown in Cannes and supplies a dash of controversy – a traditional component of the world's biggest film festival.