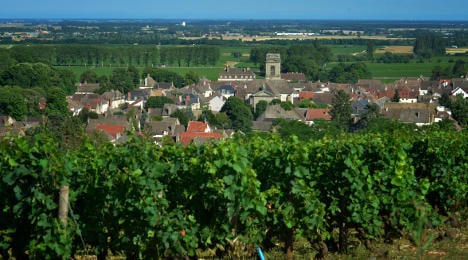 The battle against the building of wind farms in France has opened up a new frontier this time in the famous wine region of Burgundy.

Construction began earlier this month on 27 wind turbines in the Hautes-Côte de Beaune area, where much of Burgundy’s finest wines are produced.

The project which will cost €80 million and create electricity for around 55,000 residents is part of a drive to build thousands of wind farms across France.

France relies heavily on nuclear power but is working to shift to renewable energy sources and triple by 2020 its number of wind turbines, from the current 4,000 that are spread across 1,127 sites.

However as has happened in other parts of the country, notably around the Unesco heritage site of Mont St Michel, residents and heritage lovers are not happy.

“What do we want France to look like in the future, a countryside full of wind turbines,” Jean-Louis Butré, President of the European Platform Against Wind Farms told The Local on Thursday.

“Burgundy is known because of the wine, people visit the region because of the vineyards and the landscape. Do you think they will come if it is full of turbines. It will ruin the image of Burgundy worldwide,” Butré said.

Campaigners fears are backed up by many in the tourist industry.

"The most important thing is to protect jobs," said Richard Vainopoulos, the president of TourCom, France's second-biggest umbrella grouping of travel agencies.

He said impact studies have shown that visitors to affected sites could fall by up to 50 percent if wind turbines are set up nearby.

Campaigners fear the construction of the wind farm will seriously harm the chances of Burgundy’s wine region gaining World Heritage Status. And there is history between France and Unesco when it comes to wind farms.

In 2011 Unesco asked France to suspend plans to build a wind farm near the famous Mont st Michel landmark, warning that it would lose its heritage status. A bid to get the Normandy landings beaches recognised as a heritage site could also be scuppered by plans to build a huge wind farm off the coast.

However President of the regional Council of Burgundy François Patriat dismissed claims that the wind farms would ruin the landscape and therefore affect Unesco’s judgement.

“We have made sure that this project will not be a factor in any rejection of our case,” said Patriat. “What is conceived cannot be taken into account in the review [by Unesco]”.

The firm behind the Portes de Côte-d’Or "wind park" insists that everything has been done to reduce the impact on the environment, pointing to the fact that the number of planned turbines had been cut from 32 to 27 to take account of the environment.

But for campaigners like Butré, this is just thin end of the wedge and he believes 27 will soon turn to hundreds.

“Of course they are going to extend it. They plan to build thousands of turbines in France so soon every village will be affected," he said.

Burgundy is currently home to 95 turbines in nine different parks, but by mid-2015 there will be 11 new wind farms that will produce power for 350,000 residents.