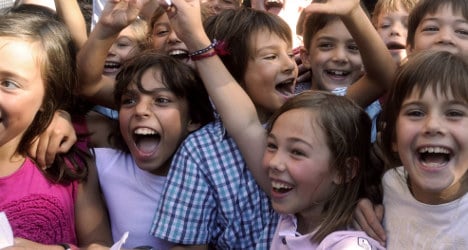 Do you worry about making the right decisions about your child’s future education?

A new global survey suggests that the French are the least likely to fret about making the right choices for their children.

The study by HSBC revealed that only 17 percent of parents in France find making decisions about their child’s education daunting. That compares with a 38 percent in the UK and 37 percent in the US.

The study, which focused on 15 countries around the world, also showed that when it comes to planning and saving up for a child’s education, the French are also the least concerned.

Whereas many parents in East Asia wish they had started to plan and save earlier for their kids’ education (Malaysia 84%, China 78%) in France only 14 percent of parents felt the same.

The results of the survey suggest the French have confidence have in their state education system right through from primary school to, colleges and lycees (high schools) and then universities, which remain free.

The French school system is highly centralized with many children entering the system from the age of 3 in nursery classes, known  as “ecoles maternelles” and not leaving until the mid-twenties. Some even start as early as aged two in a “pre-maternelle” day care centre.

When it comes to universities, French parents, it seems still see them as places of learning rather than as a place that prepares them for the work place.

For example in India income-earning potential is the biggest priority for parents, with 41 percent expecting it from a good quality education, that contrasted with just 24 percent of French parents.

Instead 33 percent of French parents believe university should provide vocational and professional training.

The survey also shed light on French attitudes towards paying for education.

Whereas the global average of parents who believe that paying for your child’s education is the best investment you can make stands at 58 percent (51 percent in the USA) in France that fell to the 36 percent and in the UK it was over lower at 35 percent.

In far eastern countries parents appear much more willing to pay for education with 80 percent of Chinese parents understanding why people do it, compared to just 50 percent in France.

French and UK parents are among the least likely to favour paid-for primary and secondary education, the survey revealed.

And when it came to which country the French feel offers the highest quality of education, the answer was Germany, followed by the US and then the UK.

In one contradiction, pointed out by Le Figaro newspaper, although the French were among those whose valued the importance of learning foreign languages, they were actually among the least likely to send their children abroad to improve their education.