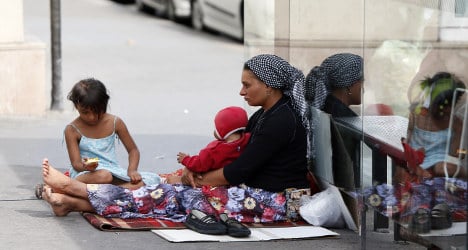 A Police in a posh Paris neighborhood have been ordered to 'purge' Roma people. Photo: Kenzo Tribouillard/AFP

An internal memo revealing police in the upscale 6th arrondissement of the French capital have orders to purge Roma people, their children and animals from the neighborhood has prompted outrage among officials and activists.

The memo, which was leaked to French daily Le Parisien, notes the order come directly from “police headquarters” and commands: “Effective immediately and until further notice, day and night personnel of the 6th arrondissement are ordered to find Roma families living in the street and systematically purge (évincer in French) them.”

Charity worker Evangéline Masson of Secours Catholique told Le Parisien she was shocked by the tone and content of the message. She denounced the “racial profiling and stigmatization of a deprived population”.

She added: “To count them in order to purge them, is simply to shift the problem elsewhere.”

The revelation had stirred such outrage on Tuesday, France's top cop, Interior Minister Bernard Cazeneuve was forced to issue a statement saying the troubling orders had been "rectified". However, Cazeneuve didn't elaborate, but in a press release wrote, "no police check can be carried out through the targeting of a person based on his actual or supposed nationality."

A high-placed official with the Paris police authority, who spoke to Le Parisien on condition of anonymity, said the orders have no basis in the law.

“It’s violent and above all illegal,” the source said. “This clumsy and unacceptable order stigmatizes a whole group of people. What right do they have to purge them?”

The mayor of the 6th arrondissement, Jean-Pierre Lecoq, a member of the conservative UMP party, defended the proposed purge.

“What shocks me, is to see Roma families in the street with young children. It not acceptable on a social or human front.”

Lecoq said the area has seen a “massive” influx of Roma families over the past two months, which prompted him to complain to local police authorities.

“The number of families has tripled,” he told Le Parisien. “It’s a real problem.”

Le Parisien cited a high-placed source at the Paris police authority who said it was the mayor’s complaints led to the crackdown.

Social workers and police authorities agree the number of Roma have surged in the 6th arrondissement lately, but only because police have chased them out of neighboring areas like the 11th arrondissement.

“It’s musical chairs”, Jean-Pierre Colombies, an official with the SNOP-SCSI police union, told Le Parisien. “We chase the Roma from one place to another, from one arrondissement to another and it resolves nothing.

The police officers have to carry out the orders from police headquarters which are often strongly influenced by political powers.”

The Local reported last week on an Amnesty International study that found French police harass and use excessive violence against Roma people, especially when evicting them from unauthorized camps. Last year French authorities expelled a record 20,000 Roma, or the entire estimated population of the group living in France.

French leaders have taken a hard line on deporting Roma people, a stance that has drawn rebukes from the European Union because most Roma in France are Romanian or Bulgarian and as EU citizens have a right to live and work there.

This line emerged when the spokesman for President François Hollande's cabinet, Agriculture Minister Stéphane Le Foll, told RTL radio on Tuesday the Roma need to return to their native lands.

We must "find ways to get them to return to where they came from, to Romania or Bulgaria,"  via "a policy that has to be humane," he said.