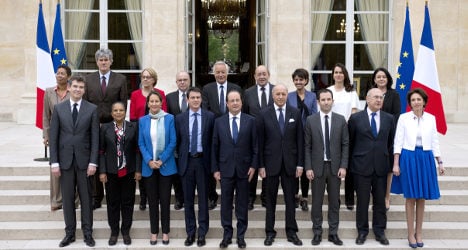 French ministers paid some €12 million in bonuses to their staff in 2013. Photo: Alain Jocard/AFP

Top government ministers' staff, 449 people in total, were paid between €25,000 and €42,000 each in "cabinet bonuses" in 2013. The payments came at a time when the French economy was mired in recession and its unemployment rate was heading up towards a record high.

The biggest bonuses, €42,478 per year, went to four members of the staff of Anne-Marie Escoffier, who was charged with devolving state powers to localities as the minister of decentralization. Close behind were Culture Minister Aurelie Filippetti’s 11 staffers who each got €42,123 in extra pay in 2013, French daily Le Figaro revealed.

According to Le Figaro, which arrived at the numbers by analyzing budget data, the smallest payments were given by Labour Minister Michel Sapin, who handed out around €8,040 per year to his staff. Sapin managed to hold onto his spot in the cabinet during Prime Minister Manuel Valls’ reshuffle, while Escoffier was shown the exit.

The bonuses drew harsh criticism from some corners of the French media, including a commentator for news magazine Le Point who compared the government ministers to the captain of the Titanic.

The bonuses were paid to “people who have raised taxes by €60 billion since 2012, who failed to reduce unemployment, the debt or trade deficit, or crime, and are not seriously reforming anything, and are idly awaiting a recovery that does not come,” commentator Charles Consigny wrote in Le Point. “In short, these people who are running this country like the captain of the Titanic, they believe they are well founded in giving money to each other they have taken from workers.”

Despite the current outrage over the bonuses, the practice is not new. Cabinet-level workers have long been receiving these types of extra incentives, which used to be paid in cash. In a step toward transparency, the money has been officially declared on the workers’ pay stubs  since 2001.

This information was released weeks after President François Hollande’s Socialist party took a drubbing from voters in the municipal elections. Bureaucrats’ pay was not a big issue in the results, which was widely seen as a rebuke of the Hollande government’s failure to fix the economy.

Hollande has made some gestures toward fiscal belt tightening. When he came into power in 2012 he cut his own monthly pay by a third, dropping it from €21,300 to €14,910 as a symbolic act of a solidarity. It contrasts with the decision of his predecessor Nicholas Sarkozy's to give himself a raise upon coming into office.

In the wake of the scandal over former Budget Minister Jérome Cahuzac’s secret Swiss bank account, Hollande's also tried to force some fiscal accountability on his other colleagues. He demanded that ministers publicly declare all their assets and encouraged all elected deputies to follow suit.