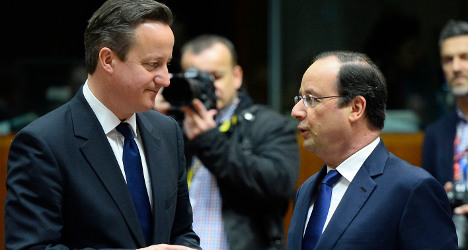 "They very firmly condemned the violence that took place yesterday and today… and called for restraint and dialogue from all sides," the Elysee said in a statement after the two spoke by telephone.

"They expressed their support for the Ukrainian government in carrying out the reforms expected by the public and in organizing the May 25 presidential election under the best conditions."

Their statement comes after Ukraine launched an "anti-terrorist operation" against pro-Russian gunmen on Sunday holed up in a police station in the restive east.

The offensive against the separatist militants threatens to further escalate tensions with Russia, which has 40,000 troops massed on Ukraine's eastern border and has warned Kiev against the use of force.

Germany said Monday there are many signs Russia is backing pro-Kremlin militias who seized the government buildings in eastern Ukraine, including the arms, uniforms and appearance of their members.

Chancellor Angela Merkel's spokeswoman said Berlin "is worried about the further aggravation of the situation in the east of Ukraine", and that Merkel had discussed the issue with Britain's Prime Minister David Cameron.

"There are many signs that the armed groups active in eastern Ukraine are receiving support from Russia," Christiane Wirtz told reporters.

Ukraine has taken the armed groups seriously, with Interior Minister Arsen Avakov announcing on Facebook that units from "all of the country's force structures" were taking part in the operation in the poor mining town of Slavyansk. He later said the gunmen had opened fire on special forces and were "shooting to kill".

With military precision and dressed in unmarked fatigues, heavily armed militants on Saturday launched a series of attacks against security buildings in the tinderbox eastern rust belt.

This came after a week of soaring tensions as pro-Russians demanding greater autonomy, or to join nearby Russia, stepped up protests in the region.

Avakov said the events were seen in Kiev as an "act of aggression" by Russia, which has flatly denied any role in the unrest sweeping Ukraine's east.

US Secretary of State John Kerry on Saturday phoned his Russian counterpart Sergei Lavrov and "made clear that if Russia did not take steps to de-escalate in eastern Ukraine and move its troops back from Ukraine's border, there would be additional consequences", a senior State Department official said.

A first wave of US sanctions unveiled in March blacklisted officials and businesspeople close to Russian President Vladimir Putin to protest at Moscow's takeover of Crimea.

And on Sunday, France said it would support new sanctions against Moscow if there is a military escalation in Ukraine, speaking on the eve of a meeting of EU foreign ministers in Luxembourg to discuss the crisis.

UN Secretary General Ban Ki-moon late Saturday called on all sides to "exercise maximum restraint" and engage in dialogue to calm a situation that has a "growing potential for violent clashes", a UN statement said.

The volatile situation in the east cast doubt on planned direct talks between EU and US diplomats and their Moscow and Kiev counterparts in Geneva on Thursday.

Lavrov had warned that if Kiev used force against "residents of the south-east driven to despair", the talks would be in jeopardy.

Acting Ukrainian president Oleksandr Turchynov convened an emergency security meeting as the violence spread on Saturday night, with no announcement except that the participants were considering measures to allow "normalisation of the situation in eastern Ukraine".

Ukraine's interim government has been facing relentless pressure from Russia since its February ouster of an unpopular Kremlin-backed president and decision to seek closer ties with the West.

Pro-Russian protesters last week seized control of the Donetsk goverment seat — where they have declared independence as the "Donetsk Peoples Republic" — and a state security building in the nearby eastern city of Lugansk.

Separatist gunmen were also in control of the police station in Kramatorsk after a gunfight on Saturday.

Earlier gunmen had seized control of a police station and local security service centre in Slavyansk — a riverside town of 100,000 about 60 kilometres (35 miles) north of the regional capital Donetsk.

Ukraine's interior ministry said the first assault was led by 20 "armed men in camouflage fatigues" whose main purpose was to seize 20 machine guns and 400 Makarov guns stored in the police headquarters "and to distribute them to protesters".

The interior ministry later reported that its forces had repelled an attack on a Donetsk chemical factory that manufactures explosives.

The police said a separate group of assailants had also unsuccessfully tried to seize the prosecutor's office in Donetsk — a bustling city of one million that was the seat of power of president Viktor Yanukovych before his ouster and flight to Russia.

But an AFP reporter saw about 200 pro-Russian protesters armed with clubs and sticks storm the city's police headquarters without meeting any resistance.

A few dozen anti-riot police who arrived at the scene were instead sporting orange and black ribbons symbolising support for Russian rule Ukraine's embattled Prime Minister Arseniy Yatsenyuk promised during an unannounced visit to Donetsk on Friday to grant more powers to the country's regions and protect the east's right to use the Russian language.

But gunmen want to hold independence referendums coinciding with snap presidential polls Ukraine will stage on May 25.