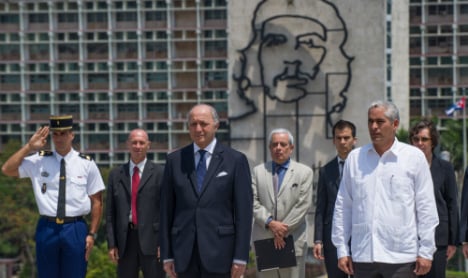 "This is the first time in 31 years that the head of French diplomacy is on an official trip to Cuba," Fabius told reporters as he spoke of revitalizing ties with the Americas' only communist nation.

"France wants to strengthen its ties with all of South America and, in this context, we wanted relations to be strengthened in particular with Cuba," Fabius added as he was received by his counterpart at the Foreign Affairs Ministry.

"Today we note a favourable development — and great potential — in our bilateral relations," said Cuban Foreign Minister Bruno Rodriguez, as he pledged his "willingness to continue to work on common goals" with France.

Coming from Mexico, where he accompanied President Francois Hollande for a state visit, Fabius was set next to meet the head of Cuba's Catholic church, Cardinal Jaime Ortega, as well as representatives of French businesses in Cuba and a number of civil society leaders.

He returns to Paris this evening.

Cuba in early March agreed to a proposal by the European Union for talks paving the way to normalizing diplomatic relations, which turned frosty a decade ago over Havana's human rights record.

Trade between France and Cuba is modest, worth around $388 million (€280 million) a year, with the balance solidly in France's favour.