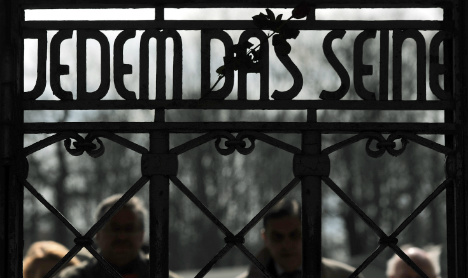 Louis Bertrand, who died aged 90 last June, had years ago expressed a wish to be buried alongside his comrades in a cemetery near the former camp in northern central Germany.

During the ceremony, those taking part walked in silence from a memorial at the camp's entrance to the site of the mass grave, Marie-Antoinette Vacelet, an official from an association dedicated to preserving the memory of Resistance veterans, told AFP.

Bertrand's ashes were interred on the anniversary of the liberation of the camp, Langenstein-Zwieberge near Buchenwald, by US forces on April 11, 1945.

"It's his way of saying: 'I haven't forgotten the guys who died in this place, and I salute their memory'," his son, Jean-Louis Bertrand, said recently.

The camp existed for 12 months, and more than 7,000 inmates from 23 countries were made to dig tunnels there to protect aircraft production from bombardment.

More than 1,800 died of abuse, malnourishment and exhaustion, and about 2,500 others perished at the time of the evacuation of the camp.

Bertrand's family worked with German authorities for two years to allow his ashes to be laid to rest in the cemetery of the town of Halberstadt, where the camp was located.

Jean-Louis Bertrand said that "a family has already spread a prisoner's ashes in a secret way. Official burials are now possible."

Born January 3rd, 1923 the son of a railway worker, Bertrand worked for the Resistance in his native Belfort region, helping found a unit in 1941 which he went on to lead from 1943.

When he was called up for compulsory labour service in April 1944, he went into hiding but was arrested in August of the same year. He was deported to Buchenwald, then transferred to the adjacent labour camp of Langenstein-Zwieberge.

He survived a forced "death march" of prisoners to evacuate the site as the Allies approached and was among those liberated by US forces in April 1945.

After the war, Bertrand shared his wartime experiences, often speaking in schools, and in 2005 published a memoir entitled "Nummer 85250" after his former prisoner number.

"He knew how to talk about Germany without rancour," Vacelet said.