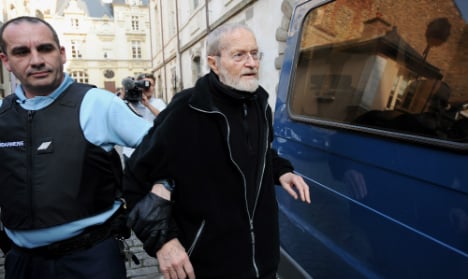 Maurice Agnelet, 76, was on Friday sentenced to 20 years in prison in his third trial for the killing of his then mistress, Agnes Le Roux. She disappeared in October 1977, aged 29. Her body has never been found.

His lawyer said on Saturday after visiting his client in jail that Agnelet "is contesting the guilty verdict."

"He maintains his innocence," Francois Saint-Pierre said as he left the prison in the northwestern town of Rennes where Agnelet is being held.

"The court of cassation will issue a ruling in about 10 months. Until then he will remain incarcerated."

Agnelet was initially acquitted of the murder but convicted on appeal in 2007 to serve 20 years — a verdict that was later overturned by the European Court of Human Rights.

His retrial in Rennes has seen a number of shocking new revelations, including testimony from Agnelet's own son who said he believed his father committed the crime.

In closing arguments, prosecutors argued that there was no other explanation for Le Roux's disappearance than her killing by Agnelet, while the defence said there was no concrete proof of his involvement.

Agnelet has always denied murdering Le Roux, the heiress to the Palais de la Méditerranée casino in Nice, who disappeared months after becoming embroiled in a hostile takeover bid of her mother's casino.

Agnelet had seduced Le Roux and persuaded her to vote against her mother at a board meeting in June 1977 and to allow the casino to be sold to a rival owner.

Money from the transaction — three million francs, worth the equivalent of about €1.7 million ($2.3 million) in today's money — first went into a joint account in the couple's name and later ended up solely in Agnelet's hands.

Agnelet was initially the prime suspect in the case but produced an alibi when another mistress claimed he was with her in Switzerland at the time. That woman later admitted that she had lied and the case was reopened.