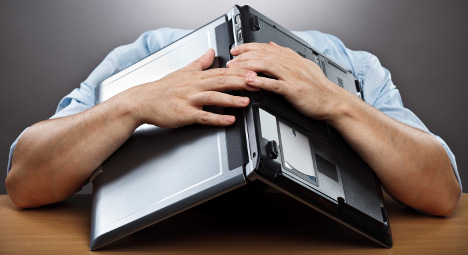 “French win right to switch off at home", “When the French clock off at 6pm they really mean it” and “No emails after 6pm please, we are French”, were just some of the headlines in the Anglo press on Thursday.

They would have us believe that President François Hollande’s latest reform to protect French employees – so often portrayed as work-shy in the Anglo press – involved a crackdown on smartphones and laptops in the workplace.

Unfortunately it’s not quite true but, as the French press complained: the British press won't let the truth get in the way of a chance to have a pop at the French.

“Strikers, lazy, arrogant… the English do not miss an opportunity to ridicule the Froggies,” read the article in 20Minutes on Friday that was headlined “According to the English, we don’t have the right to work after 6pm in France”.

The site Rue 89, also accused the Anglo media of promoting the most hackneyed clichés about France.

“What is funnier [for the Anglo press] than the capacity of French bureaucrats to invent absurd rules to promote non-work,” their article read.

20 minutes blamed the Guardian blog that had started the ball rolling for the fact France “had become a laughing stock” throughout the Anglo web.

The Guardian had cited an article in Les Echos about the signing of an agreement between employers’ federations and trade unions in the technology sector aimed at protecting the health and wellbeing of a certain group of employees. One part of the agreement focussed on an “obligation to disconnect”.

“The employer will ensure the necessary arrangements so that the employee has the opportunity to disconnect from the remote communication tools at its disposal," read the text of the agreement.

News of the deal was published in Les Echos and then picked up by the Guardian.

“Just in case you weren't jealous enough of the French already, what with their effortless style, lovely accents and collective will to calorie control, they have now just made it illegal to work after 6pm. Well, sort of,” read the Guardian. Their article was quickly gobbled up by media sites from the US to Australia.

Anglo social media channels went into meltdown with incredulity at the thought of their work-shy French counterparts switching off their phones and lap tops en masse across the country at 6pm, to protect their right not to work a single minute more than the infamous 35 hours a week.

Once the smartphones were off French workers, dressed in Breton sailor outfits, with garlic bulbs hanging around their necks would then all head to the nearest brasserie to dine on foie gras and duck confit and share a bottle of Bordeaux to forget about the state of their country’s economy.

But as Slate.fr pointed out on Friday there were just a few inaccuracies in the Anglo press’s coverage of the “disconnection agreement”, that ruined this whole image.

“France has not banned workers from sending emails after 6pm” was the simple headline in Slate. The site pointed out that the agreement, which was not a new law, between federations Syntec and Cinov and unions CFDT and CGC, only affects around 200,000 workers, not the whole of France as some of the headlines would have us believe, not even the “million workers” quoted in the Guardian.

Those workers are mainly employed in management positions and work outside the framework of the 35 -hour week nor a typical 9 'till 5  or 10 'till 6 hours. In reality they work all hours of the day and evening, hence the need for them to be protected.

Slate also points out that agreement has no mention of a 6pm cut-off point, in fact there is no ban on workers checking emails after a certain time, just that they should step away from their work email for 11 hours a day.

“If we don’t know the concrete form of how the agreement will be implemented, it is not a ban on working from home as suggested by our Anglo-Saxon colleagues,” the article reads.

“We will not ban an employee from taking a USB key home to work,” said one of the union representatives.

In reality as union leader Michel de la Force explains, the agreement simply means: “That an employee who does not open his emails on his time off, cannot be criticized.”

Surely most Anglos would agree there’s not a lot wrong with that.

What do you think? Could we do with an outright ban on checking work emails after a certain time?

Although a ban on work emails isn't one of them, there are other perks of working in France  – see below.

Ten reasons why France is a great place to work