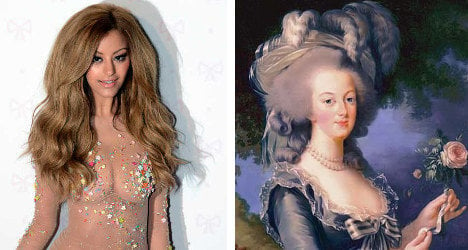 One is arguably the most iconic female historical figure in France and the other is a former escort girl who became infamous for a very modern scandal after having sex underage with two French international footballers.

But two French artists Pierre and Gilles believed they were a perfect match for a work of art designed to reincarnate the famous former French queen.

Despite having carte-blanche for the work, commissioned to celebrate the golden age of the famous tapestry factory in Paris, Manufacture des Gobelins, the pair opted for a woman synonymous with a classic modern day sex scandal.

“As soon as we thought of doing Marie Antoinette, it had to be Zahia for us,” they said.

A smiling Zahia is painted in an idyllic scene, wearing a white flowery dress, with a rural background featuring a lake, swans and an old water mill. They chose Zahia “for her beauty”. “This is a character that cannot be ignored, just like Marie Antoinette. She is someone with character and has everything to be a queen.”

For her part Marie Antoniette, some scholars argue, was prompted the start of the French Revolution due to the fact she was so frivolous and superficial.

It’s doubtful Zahia, who has reinvented herself as a fashion mogul after the underage sex scandal, will have such an impact on French society.