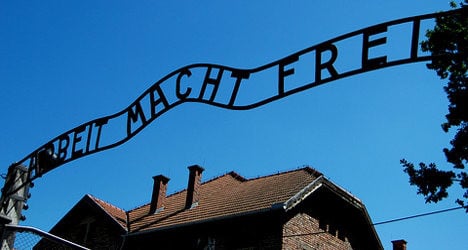 Spokeswoman Jen Psaki confirmed the United States and France were in talks on "compensation for victims of deportations by rail from France to Nazi labor and death camps as well as for victims' families."

And she called on "all concerned to avoid actions that undermine the ongoing compensation talks."

"It is our mutual aim to conclude these talks as quickly as possible," Psaki added in a statement.

But she hit out at state assemblies such as Maryland and New York which she said had "begun to pose a serious obstacle to achieving this goal."

During the occupation of France by Germany and the so-called Vichy regime, SNCF deported some 76,000 Jews to concentration camps in freight cars between 1942 and 1944. Only around 3,000 survived, according to the state-owned company.

SNCF has said it was a "cog in the Nazi extermination machine" and that any eventual compensation should be paid by the French government.

But the sensitive, decades-long issue of SNCF's role in the deportations is threatening a reported $2.2-billion contract between the rail company and the US state of Maryland.

Maryland lawmakers had demanded that SNCF compensate the victims before being allowed to join the bidding process for local projects and introduced bills to that effect.

But those measures never made it to a vote in either the eastern state's House or Senate during the 2014 legislative period that ended at midnight Monday, according to sources in both chambers.

This means that SNCF, via its subsidiary Keolis America, will be able to bid on the 16-mile (25-kilometer) public-private light rail project between now and this summer.

During emotional hearings in March in Annapolis, Maryland, Holocaust survivors and their families had demanded they be compensated for their ordeal.

"The current American-French dialogue, in our view, represents the best means of reaching an agreement that will meet the concerns expressed by lawmakers in these states," Psaki said.

SNCF, in eyeing the rail contract, is part of a consortium comprising fellow French firms Alstom and Vinci. A winning bid is expected to be picked by the end of the year or in early 2015.