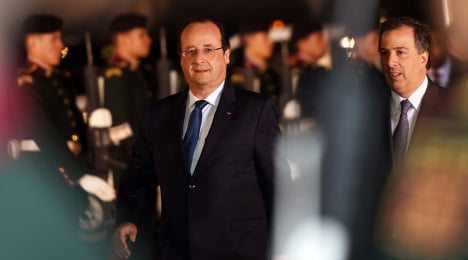 The French leader's jilted ex-girlfriend has stepped back into the limelight with a tweet urging Paris to help a woman who says her Mexican ex-husband abducted their children, just as Francois Hollande visits Mexico.

Valerie Trierweiler, a glamorous journalist, had been keeping a low profile since she was dumped by the President earlier this year following revelations he had been having an affair with actress Julie Gayet.

But just as Hollande flew to Mexico on Wednesday for a trip aimed at renewing strained relations between the two countries, the 49-year-old tweeted her support for Maude Versini "who has not seen her three children for 847 days, held by their father in Mexico."

"I am very happy about Valerie Trierweiler's support, it's precious to me," Versini said Thursday in an interview with Europe 1 radio.

She said she had long been fighting against her former husband, a prominent politician who is close to President Enrique Pena Nieto, with whom Hollande is due to meet later on Thursday.

He "was governor of the state of Mexico, hugely powerful and the political godfather of the current Mexican president," Versini said.

Montiel was included in Forbes' list of the ten most corrupt Mexicans of 2013.

"Montiel dropped out of the 2005 presidential race following allegations of millionaire mansions and bank transactions in Mexico and France. He is not under investigation," the magazine reported at the end of last year.

Versini said her husband "does not hesitate to use all his influence, to buy out judges, he is scared of nothing and feels he is above the law."

She added Trierweiler had been very helpful, and had met with her twice when she was still with Hollande.

"She told me at the time that she would try to go to Mexico on this trip with Francois Hollande," Versini said.

This is not the first time that Trierweiler has caused a commotion with a tweet.

In parliamentary elections in June 2012, weeks after Hollande was elected president, she fired off a tempestuous tweet expressing her support for a Socialist candidate fighting Segolene Royal — the mother of the president's four children whom he left for Trierweiler.