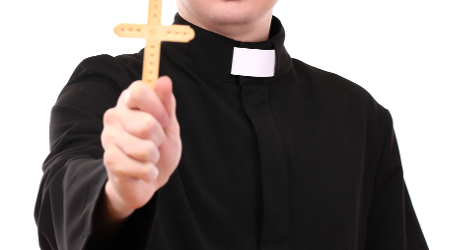 The 40-year-old priest was indicted this week on charges of rape, cruelty and torture for the acts that allegedly left one of the victims in the Paris suburbs so disturbed that she couldn’t even describe them to investigators.

Police said the priest raped the three women in the autumn of 2010 after coming into contact with them at the private religious school Ecole Notre-Dame-de-la-Sablonnière in Goussonville, which he was running at the time, French newsite Toute Les Nouvelles reported.  It alleged he had first raped one teacher during an exorcism to purge her of the "evil" from a previous sexual assault.

The priest used his "spiritual influence" to convince two other female teachers to undergo similar exorcisms, French daily Le Parisien reported. It said the victims had claimed that acts of torture had been committed using a broom, a toothbrush and scissors during the ceremonies.

Police became involved only last year when two of the women reported the rapes to authorities. After learning of the crimes several years ago the priest’s fundamentalist society of St. Pius X tried him in a religious hearing and sentenced him to two years in a monastery.

While being interrogated earlier this week the priest allegedly told detectives that he had only “mimed” sexual acts and had not raped the victims, one of whom had come to him for help because she'd been sexually abused. An unnamed police source told Toute Les Nouvelles that the priest suffers from mental problems.

“He's obsessed with sex,” the source said. “In his own way he was fighting fire with fire.”

The Society of St. Pius X is a congregation of traditionalist Catholic priests founded in 1970. Its historical leader, Archbishop Marcel Lefebvre, was excommunicated by the church. This quasi-sectarian group refuses the authority of the Vatican and defends a vision of Catholicism that rejects its modern evolution.

With 600,000 followers in 62 countries, the group founded in 1970 by French bishop Marcel Lefebvre has been dogged by accusations of anti-Semitism and far-right leanings. Lefebvre was ex-communicated in 1988 and died in 1991.