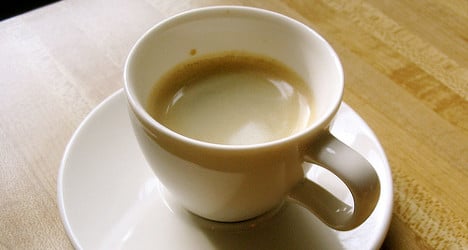 In mice, regular doses of caffeine inhibited the growth of tau, a protein that clogs brain cells in Alzheimer's patients, they said.

The discovery was made among mice that had been genetically modified to produce tau.

This is roughly equivalent to two cups of coffee per day for human beings.

The mice were compared with an identical group of "tau" rodents which did not get the caffeine dose.

"Mice that were given caffeine were less affected in terms of memory and tau buildup but also in terms of inflammation of the brain tissue," said David Blum of France's National Institute of Health and Medical Research (Inserm).

Previous research has found that older people are less likely to suffer cognitive decline if they take regular, moderate amounts of caffeine.

Experiments have also found that caffeine slows memory loss in mice bred to develop so-called amyloid plaques – another compound buildup in the brain that is associated with Alzheimer's.

The study appears in the US journal Neurobiology of Aging.

Researchers led by Francois Sztark at the University of Bordeaux in southwestern France analysed data from a long-term study into cognitive decline covering 9,300 elderly people in three French cities.

The volunteers — average age 75 — were interviewed when they were recruited into the study and then two, four, seven and 10 years afterwards.

The data showed a link between the onset of dementia and a general anaesthetic that had been administered two or three years before.

Those who had received general anaesthesia were 35 percent likelier to develop dementia symptoms by the next follow-up interview compared with counterparts who had not had general anaesthetic.

The reasons for this, though, are unclear. Some experiments suggest that various anaesthetics inflame neural tissues, causing protein plaques and tangles to develop that are precursors of Alzheimer's disease.

The research was released at a congress in Barcelona, Spain, of the European Society of Anaesthesiology.

"These results are in favour of an increased risk for dementia several years after general anaesthesia," Sztark said in a press release, adding that patients who underwent major surgery needed long-term support.