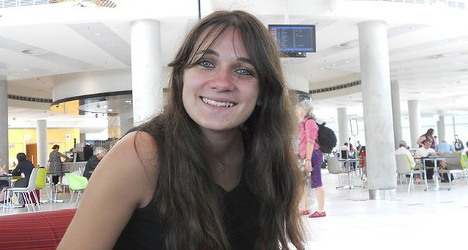 Exchange student Sophie Collmbet, who was raped and murdered in Brisbane. Photo: Facebook

A young Australian man appeared in a Brisbane court on Wednesday charged with the rape and murder of 21-year-old French student Sophie Collombet, reports said.

Collombet's naked body was found in a rotunda at a park near her apartment in South Brisbane on March 28. Police said the business student had been beaten to death.

"A 25-year-old man has been charged with one count each of murder, rape, deprivation of liberty and robbery," Queensland Police said in a statement.

The ABC said the man, who cannot be named, appeared briefly at Brisbane Magistrates Court after being picked up by police in Coffs Harbour in neighbouring New South Wales state.

He was remanded in custody and is due to face court again in May.

Collombet is the fourth foreign student to be brutally murdered in the Australian city of Brisbane in almost as many months.

The exchange student's killing follows the stabbing to death of Singaporean Meena Narayanan in March.

Just months before, South Korean student Eunji Ban, 23, was found battered to death in a Brisbane park and weeks later the body of another South Korean, 28-year-old Min Tae Kim, was discovered in a shallow grave in a backyard.

There is no suggestion the deaths are linked and police have said they believe the victims were simply in the wrong place at the wrong time.

Officials have insisted that visitors from overseas have nothing to fear with Prime Minister Tony Abbott, on a visit to Seoul on Tuesday, saying Australia was by international standards "very, very safe".

"The last thing we want is visitors to our country feeling unsafe," he said.

Flowers and tributes have been left at the park where Collombet's body was found.

The accused's mother, who was reportedly in court in support of her son when he made his appearance, has also visited the park and offered her sympathy to Collombet's family.

"We're all so sorry and sad and it shouldn't happen to anybody. A beautiful girl like Sophie, she's just gorgeous – it's just wrong," she said.