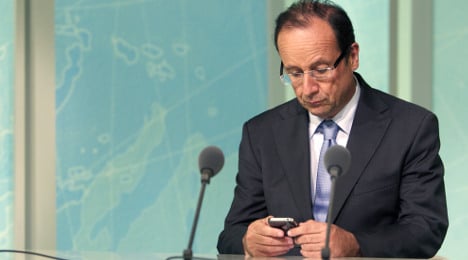 In an effort to stay focused, the French president has banned mobile phones from government cabinet meetings. Photo: AFP

Keen to ensure his ministers are paying attention, Hollande on Wednesday imposed a strict ban on mobile telephones during cabinet sessions.

Ministers will now be forced to leave their portable devices at the door when they join the French government's weekly cabinet meeting, government spokesman Stephane Le Foll told reporters.

"To focus on what we must do, the president has decided that there will be no more mobile phones in cabinet," Le Foll said.

"Each of us will now have to talk and listen to what is said and will no longer be able to tap away at this magnificent tool," he said.

Asked if Hollande himself had handed in his phone, Le Foll said: "I didn't go and check."

Last year the previous Prime Minister Jean-Marc Ayrault also ordered a crackdown on minister's mobile phones, but back then it was out of fear they wear being spied on rather not concentrating.

Ayrault banned government ministers and their staff from using their smartphones and tablets to transmit sensitive information in the wake of the NSA spying revelations.