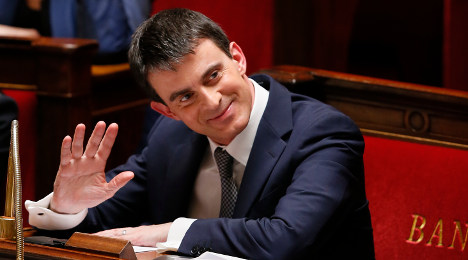 New PM Manuel Valls's first speech to parliament was given a warm reception by the press on Wednesday. Photo: Patrick Kovarik/AFP

“The tone has changed” was the front page headline in Le Parisien newspaper on Wednesday morning, the day after Valls’s first speech as Prime Minister to the French parliament.

The newspaper welcomed his 47-minute muscular discourse in which he laid out a series of cuts to taxes and payroll charges, which he intends to carry-out in a bid to reignite France’s beleaguered economy.

Le Parisien welcomed the contrast between Valls’s all-action style to the more passive approach of his predecessor Jean-Marc Ayrault. “A different tone, a different impetus – a clear diagnosis on the state of France and the French and a package that looks like a presidential program” was how the newspaper described the speech.

Le Parisien wasn’t the only newspaper to talk about a change of tone. Dominique Seux in the business paper Les Echos also welcomed the new “tone and the depth” of his address.

Dominique Quino from Catholic newspaper La Croix described it as a discourse of “truth, efficiency and appeasement”.

In La Depeche du Midi Jean-Claude Souléry saluted how Valls had “shaken up the left, the right and the French at the same time”.

There were naturally some more sceptical responses in the French press, with Eric Découty of Liberation accusing Valls of “selective talking”, noting that he was willing to confront certain subjects with his “brief and concrete” style but “carefully avoided detailing his plans to achieve his €50 billion of savings”. Right-leaning newspaper Le Figaro was predictably less complimentary about Valls, with columnist Alexis Brezet suggesting he was simply presenting more of the same of what we have come to expect from President François Hollande.

Brezet called the new PM “constrained, borrowed, tied up: in a word 'Hollandised' ”.

“He is the not the reformer we had hoped,” said Brezet.

Valls's speech also drew tepid criticism from opposition parties but but economist Pascal Perri welcomed the measures as striving to boost both businesses and consumer demand.

"It's an excellent idea to give back some spending power at a time when the domestic market forms the main pillar for growth in France," he said.
"I have the feeling that the French want someone with a real will, who expresses ideas of common sense as was the case today with Manuel Valls.
"Momentum is needed and what I heard today goes in the right direction."