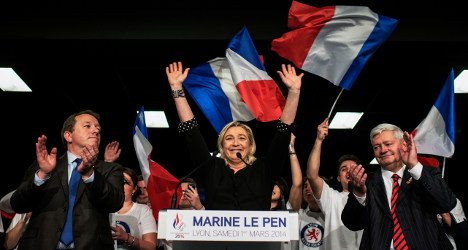 British cities have shrugged off the far-right victories in their twin cities across the Channel. Photo: AFP

After far-right candidates won 14 towns in France’s historic local election last month the response from Belgian cities twinned with two of the communes was swift.

"Politically, we cannot continue to work with people who develop such views, such ideologies," Hughes Bayet, the Socialist mayor of Farciennes, which is twinned with Beaucaire in Northern France, told Belgian broadcaster RTBF.

However, elected officials in the British towns of Stockport and Wakefield, which are twinned respectively with Béziers and Henin-Beaumont, say the fact their sister cities are now governed by mayors backed by the anti-immigration, anti-EU party National Front, will not prompt official ties to be cut.

In Stockport, Council leader Sue Derbyshire had come under pressure from the left-wing Labour group to end its twinning with with Beziers, but although she said she wouldn't accept – or offer – any official visits at present, she sees cutting ties with the French town a breach of the democratic process.

“As a democrat, I have to accept the result of the electoral process,” Derbyshire was quoted as saying in the Manchester Evening News. “If we say democracy is good, as long as we agree with the result, but if we don’t, then they can get lost, we will push those in a pluralist society who have minority views to believe they have no place in the democratic process.

“We wouldn’t like it if they did it to us and I don’t think we have the right to do it to them," she said before adding “while I would not extend or accept an invitation to or from Beziers at the moment, I don’t see any need to say to them ‘we disapprove of you, therefore we’re not going to have anything to do with you’."

Since being elected Beziers mayor Robert Menard has banned the serving of halal meals in town canteens and sacked the local police chief.

Derbyshire however pointed to the fact that Stockport, twinned with Béziers since 1972, hasn't had a civic exchange since 2005 with its French counterpart and not much school school involvement either lately.

"Twinning was a post-war way of making connections internationally, but in this day and age, it’s not really necessary. It was always about culture, schools and young people," she said.

The council over in Wakefield was similarly unmoved by the The National Front's electoral success in its twin town of Henin Beaumont, though for more pragmatic reasons.

“We don’t have the budget these days to have run twinning arrangements in the way we used to do and don’t have active links with Henin-Beaumont, so not really in a position to comment at the moment,” a Wakefield council spokeswoman told The Local.

One of the first things Henin Beaumont's new National Front mayor Steeve Briois did after gaining office last week was to boot the local branch of the League of Human Right's out of their office and cut their €300-a-year subsidy, saying they are were not entitled to it.

"The law will be respected in Henin-Beaumont," he said.

The local elections have prompted quite a shake-up in France, however. As a result of voters deserting President François Hollande's Socialist party en masse, the prime minister has been replaced and the cabinet reshuffled in an attempt to quell the electorate's anger over the poor state of health of the economy.