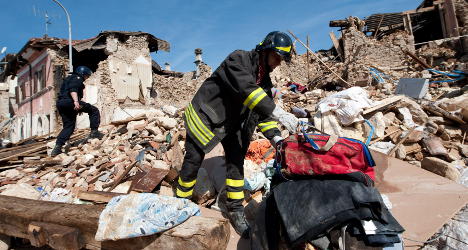 Firefighters look through rubble in the aftermath of the 2009 L'Aquila earthquake in Italy. A similar sized quake will hit France, experts say. Photo: Christophe Simon/AFP

Those were the words of French seismologist Remy Bossu from the European Mediterranean Seismological Centre (EMSC) in Paris, the day after a rare earthquake measuring 5.2 magnitude on the Richter scale hit the south east of France.

Monday night’s quake, felt in towns from Nice to Marseille and Aix-en-Provence to Grenoble, may have caused little damage but it was a stark reminder, Bossu says, that south-eastern France is in a potentially dangerous active seismic zone and the next one could do some serious damage.

The last time France was hit by a deadly tremor was back in 1909 in the town of Lambesc in Provence, which left 46 people dead and 250 injured. (See photo) The earthquake measured around 6 on the Richter scale and is the still the largest quake ever recorded in mainland France.

EMSC’s Bossu says deadly quakes of that scale hit France on average every 100 years, so based on averages a big tremor is due.

And when it does strike, Bossu says, we could see the scale of damage seen in the historic Italian town of L’Aquila which was devastated by an earthquake five years ago that left nearly 300 dead. After the quake six scientists were jailed for manslaughter for playing down the risks of earthquakes.

The problem scientists like Bossu face in trying to raise awareness of the danger of quakes is that, because it has been so long since France experienced a serious one, the risks are no longer in people's consciousness.

“In Italy or Greece everyone is fully aware of the risks simply because earthquakes happen more often. Everyone knows about them and it’s part of their culture, but not in France,” Bossu says.

“That’s what makes our job of raising awareness very difficult. One day it will strike and there will be casualties, for sure. There’s no doubt.

“The only thing we can say is that Monday night’s quake should be a warning call to people. It is the best way for people to ask themselves, “Do I know what to do in an earthquake?”.

France has other priorities

The scientist admits however, that France has other priorities than earthquakes to concentrate its resources on.

“The number of casualties killed by earthquakes in France does not compare to the 3,000 or so killed on the country’s roads each year. We have to be honest,” he says. “We don’t want to say earthquakes are an extreme risk in France but people need to be aware.”

The problem for the French authorities, Bossu says, is the cost of making buildings resistant to earthquakes.

“With new buildings it’s no problem, the building codes are easy to implement. But with old ones, like churches it’s very hard and costly to strengthen the foundations without damaging it. We see this same problem in Italy.

“If a big one comes then the church will probably be destroyed, but authorities say ‘well it’s been there for 500 years, why not 500 more’”.

What not to do in an earthquake

When it comes to how to act in an earthquake Bossu says it’s vital to remember one thing – don’t immediately run outside.

“Chimneys are the first things that fall,” he says. “If you leave your home, you increase the risk of being hurt. You have to protect yourself from falling objects,” he says, advising that it’s better to get under a table.

If it's a strong shake then there will be aftershocks, so Bossu says the wise thing to do would be to cut off the electricity and gas and wait in an open area away from buildings.

He also says anyone living in those areas affected should take measures to make sure shelves and other objects are properly attached to walls and anything placed high up is securely fastened.

“Many casualties are caused by things like TVs falling off shelves. It’s stupid to be killed just because you didn’t want to make a hole in the wall. These basic things can save your life.”

CLICK HERE for more on what to do in an earthquake.