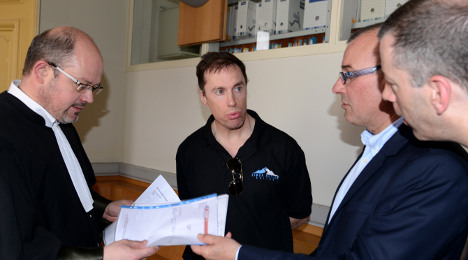 British ski instructor Simon Butler (C) speaks with his counsels as he attends on April 7, 2014 a hearing at the court in Bonneville. Photo: Jean-Pierre Clatot/AFP

A French prosecutor called on Monday for a one-year sentence and a €10,000 ($14,000) fine for a British ski instructor charged with teaching without proper qualifications in one of France's poshest ski resorts.

The case against Simon Butler, who has been teaching clients how to ski in the French Alps for more than 30 years, goes to the heart of Europe's labour laws and has sparked outrage in his native country.

Despite having the highest-rated British ski instructor's licence, Butler has stubbornly refused to obtain qualifications needed to teach in France, in the face of repeated convictions and fines.

Pierre-Yves Michau, the prosecutor in the Alps town of Bonneville, cited the instructor's "obstinate refusal to abide by the law" in making his sentencing request. Eight months of the sentence would be suspended.

The ruling will be handed down on June 16.

"These are purely technical questions. There is no discrimination, no attack on the sacrosanct principle of free movement in the European Union," Michau said.

"Mr Butler does not represent his countrymen because there are hundreds of British ski instructors who teach in France without any problems."

'They don't want us here'

Before the trial, Butler vowed to move his business – which employs 28 people and hosts about 100 guests a week from December to April – if he is convicted.

"If I lose this trial and if I can't keep working in France, I will take my 100 clients to Switzerland," he said.

The trial has sparked consternation in Britain, leading the French Embassy in London to deny there was a "piste war" taking place in the French Alps.

London Mayor Boris Johnson called the dispute "a complete, naked, shameless and unrepentant breach – by the French – of the principles of the European Single Market.

But Michau stressed that the 51-year-old Butler had "never taken the slightest step to conform to the French law."

He also called for fines for five other members of Butler's team and for a suspended prison sentence and a fine for another employee.

Under French rules, foreign instructors have to pass the Eurotest, an integral part of the training of ski instructors in Austria, Britain, France, Germany, Italy and Spain. The test involves completing a tough downhill slalom at racing speed.

Butler, who runs two hotels in Megeve, and his team all have the level three or four certificates issued by the British Association of Snowsport Instructors required by Britain to teach skiing on slopes like those in
Megeve.

France issues its own certificates from the Ecole du ski francais and does not automatically recognise the British equivalents.

Butler has alleged he is being targeted in a campaign to drive away foreign instructors and have them replaced with French ones.