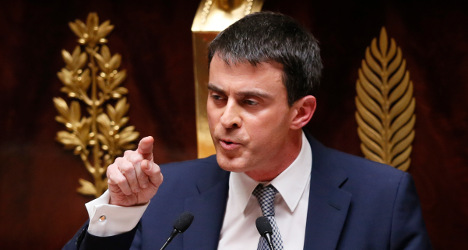 In his first major address after being named prime minister last week, Valls unveiled a wide-ranging package of reforms and cuts, many of which are aimed at lifting France out of its stubborn economic crisis and bringing down the country's record unemployment rate.

In a muscular 47-minute speech Valls laid out the economic priorities of his streamlined, reshuffled government to the National Assembly. Valls said the measures were aimed at boosting competitiveness and increasing the spending power of consumers.

"Too much suffering, not enough hope, that is the situation of France," he said, kicking off the speech.

In his comments in which he vowed to "open a new chapter" for the Socialist government of President Francois Hollande, Valls outlined a series of measures aimed at reviving the economy.

Valls also easily passed on Tuesday a vote of confidence in his new government, which was formed after President François Hollande moved aside his predecessor Jean-Marc Ayrault after the Socialist party took a drubbing in local elections last month.

Here's what Valls is promising to do to turn the economy around:

The new PM insisted "we must straighten up our public finances but not by destroying our social model or our public services."

"I am for respecting our commitments, for budget responsibility, not for austerity," Valls said.