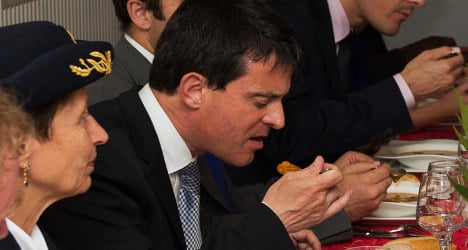 Manuel Valls has apparently laid down the law when it comes to fish and meat for his dinner. Photo: Bertrand Langlois/AFP

Spanish-born Valls has only been in the job less than a week but he has already laid down the law, at least with the chefs at the official Prime Minister's residence of Matignon in Paris.

French chefs have a reputation for being slightly intolerant of dietary requirements or preferences, but that didn't concern Valls it seems.

According to Le Figaro newspaper one of the first things Valls did on replacing his predecessor Jean-Marc Ayrault, was to alert the Michelin starred Matignon chef Christophe Langrée and his team to his strict dietary requirements.

They include a widespread ban on fish, Le Figaro says.

Barcelona-born Valls is apparently not a fan of poisson, which may appear strange given he comes from the Mediterranean region of Spain, where fish is considered an important part of the diet.

Instead Valls has told the chefs that he only eats red meat.

The new PM, also has a gluten intolerance, which as Le Figaro seemingly gleefully points out, will rule him out of several classic French desserts like lemon Meringue pie as well as certain biscuits, cakes breads and other products.

The French press were quick to pounce on the story of Valls’s dietary demands, leading to headlines such as Le Figaro's “Manuel Valls drives the Matignon chefs crazy” and Le Parisien's “The culinary requirements of Manuel Valls trouble Matignon’s chefs”. Valls however joins a growing number of French eaters who won’t eat certain products unless they are gluten free.

France, a country where 500,000 people reportedly live with a gluten intolerance, has seen sales of gluten-free products grow tenfold since 2008, according to the French association for people with gluten sensitivities.

In reality Valls’s dietary demands are unlikely to upset the Matignon chefs as much as fellow minister Nicole Bricq angered the chefs at the Presidential Palace last week.

Bricq was over-heard telling the former PM Ayrault and his wife that the food at the state banquet for the visit of the Chinese President Xi Jinping was "disgusting". The minister who lost her job in the reshuffle last week was later forced to issue a very public apology.