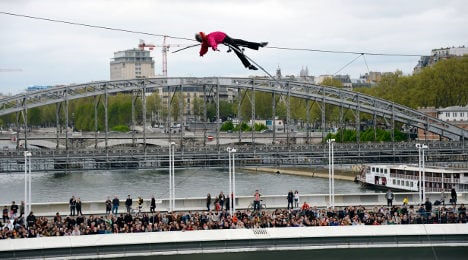 There's various ways to cross the River Seine but not many will ever manage it like Denis Josselin did on Sunday.

He traversed the famous river on a 150-metre long cable between the Quai de la Rapée and on the right bank and Quai d'Austerlitz, taking around 30 minutes to achieve the feat.

Josselin entertained the crowds who had gathered to see him, even stopping at one point to put on a blindfold.

"Ever since I started walking on the cables I have stopped dreaming of flying. I am flying," he said after successfully completing his feat.

You can see how he did it in this video courtesy of Parisian News TV.

The last time the Seine was crossed in such a fashion was by Josselin himself ten years ago, who first began tightrope walking in 1988, the blog Polly Vous Francais reports.

Josselin is trained in mime, dance and circus arts, and says he "stumbled" into tightrope walking back in 1988.