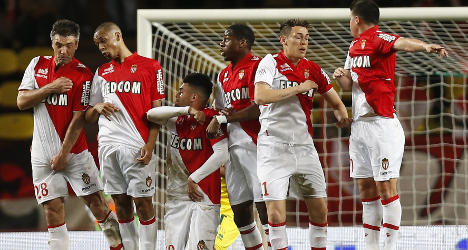 The win moved Monaco on to 66 points, 13 behind PSG with just six games left to play while Lille are third on 60 points.

Monaco were in front on 18 minutes through a long-range drive from James Rodriguez who netted his eighth goal of the Ligue 1 season after being set-up by Dimitar Berbatov even though the former Manchester United star appeared to be offside.

Monaco goalkeeper Danijel Subasic then pulled off a series of fine saves to keep out Nantes.

The home side grabbed a second goal on 72 minutes thanks to a powerful header from Andrea Raggi before Rodriguez made it 3-0 from the penalty spot four minutes later.

American international Alejandro Bedoya headed in a fine goal for Nantes in the 78th minute but it was little more than a consolation.

Saint-Etienne wasted a chance to move within three points of third-placed Lille as they were held to a 1-1 home draw by mid-table Nice.

The former French champions were heading for a shock defeat after Mathieu Bodmer put Nice in front just before the hour mark, before a late twist of fate for the visitors.

Nice captain Didier Digard conceded an injury-time penalty and was sent off for a second bookable offence which allowed Max-Alain Gradel to salvage a point for Saint-Etienne from the spot.

The point leaves them five points behind Lille, who won 2-1 at Toulouse on Saturday, while fifth-placed Lyon moved within four points of their arch rivals with a 2-1 victory at third-from-bottom Valenciennes.

Paris Saint-Germain are well on their way to a second straight title after a 3-0 home win over Reims on Saturday.

Laurent Blanc's side are on their way to London and a Champions League quarter-final second leg showdown against Chelsea on Tuesday after winning the first leg 3-1 at the Parc des Princes last week.