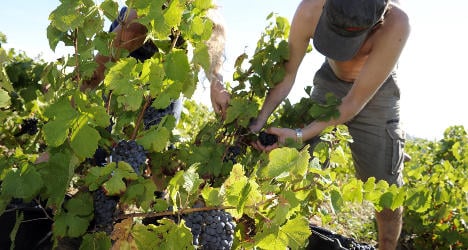 Burgundy winegrower fined for refusing to use pesticides on his vines. Photo: Philippe Desmazes/AFP

Emmanuel Giboulot was taken to court by an arm of the agriculture ministry for not heeding a local directive in Burgundy's wine-growing Cote d'Or area to regularly treat vines against a leaf-hopping insect that causes disease.

On Monday Giboulot, who had faced being jailed for up to six months and a €30, 000 penalty over his refusal to treat his crops with chemicals, was in the end hit with a €500 fine.

The pesticides were used to prevent an infectious disease called "flavescence doree".

The disease first appeared in 1949 in France's southwestern Armagnac region.

It then spread steadily, reaching the wine-producing areas of Cognac, Languedoc, northern and southern Rhone, the Loire Valley and Bordeaux.

There is no cure yet for the bacterial infection, which can kill young vines and greatly reduce the productivity of older ones.

After the discovery of the disease in Burgundy's Beaune region, the local administration last June ordered all vineyard owners in the Cote d'Or area to treat their vineyards with pesticides.

But Giboulot has doggedly defied the order and shunned pesticides on his 10-hectare (24-acre) estate straddling the Cote de Beaune, the southern part of the Cote d'Or that is home to the great names in Burgundy wine.

He argued that the order would destroy the work of his father, who converted to biodynamic farming in the 1970s.

His defiance has won the support of leading environmental groups including Greenpeace and France's Green party.

"In the absence of a proven health threat, freedom of choice should be given," said Sandrine Belier, a Green party lawmaker in the European Parliament.

Environmentalists argue that instead of ordering the sweeping use of pesticides, local authorities should only monitor the disease, uproot affected vines and limit the mandatory use of pesticides to the areas under threat.

Local officials insisted Giboulot was not being persecuted and that the step is vital to save vineyards across the region.

"All vines must be treated by everyone for the treatment to work," said Olivier Lapotre, the head of the local food department.

"It's a deadly disease for vines and very contagious and it's because of this that such measures are obligatory," he said.

Burgundy officials say the policy is paying off. The prefecture said only 0.20 hectares were seriously affected by flavescence doree in 2013 and the vines there uprooted, against 11.3 hectares in the previous year.

Denis Thiery, the head of research at the Bordeaux wing of the French National Institute for Agricultural Research, said the disease had "exploded in the past decade," arguing the case for the use of pesticides.

"Almost all French wine-growing regions have been affected except the Jura, Alsace and Champagne," he said, adding that the order had to be respected.

"It's like refusing a vaccination when it's mandatory," he said.

Claude Chevalier, the head of the Burgundy Wine Board representing producers, said the case had been overblown and defended the practices of regional winemakers.

"We cannot tolerate the falsehoods being said about what is done in Burgundy. In Burgundy we do not pollute," he said, adding that Giboulot " is not the only person defending nature in Burgundy."