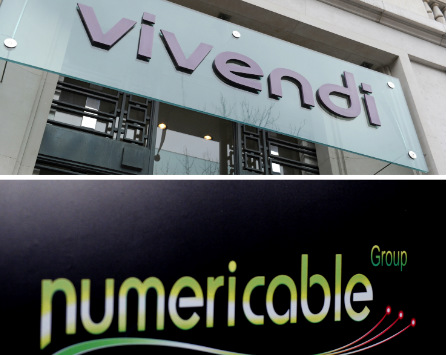 "The supervisory board has unanimously decided to accept the Altice/Numericable bid," Vivendi said in a statement, saying it was the more likely to favour "growth (and) create value for customers, employees and shareholders".

"All the experts consulted concluded that the Altice/Numericable offer presents the least risk in terms of competition. SFR and Numericable are not in the same segments of the market and their activities are complementary," Vivendi added.

The deal with Altice/Numericable, which Vivendi called "a better balance", would involve an initial payment of €13.5 billion, followed by another payment of €750 million and eventually the ability to own and then sell its 20 percent stake in the new enterprise.

The fate of SFR was seen as having a big impact on the structure of mobile phone services in France against a background of consolidation in European markets.

A takeover of SFR by Bouygues would have reduced the number of dominant operators to three, generating some political controversy and raising concerns among consumer groups that the benefits of new competition for customers would be eroded.

The launch of low-price services in 2012 by the much smaller new fourth operator Free sowed upheaval and a price war in the French mobile telecom market to the benefit of consumers.

SFR's incorporation into Numericable however will keep four operators on the market, though strengthening SFR-Numericable's position as a powerful competitor capable of offering customers a complete package of mobile, Internet, television and fixed-line telephone service.

On the political front, there has been some opposition to an SFR sale involving Numericable's parent company Altice, a foreign-registered group owned by Frenchman Patrick Drahi who is a resident of Switzerland.

The French government, which is struggling to bring down its public deficit, has been bluntly critical of citizens who keep their assets in tax havens like Switzerland, Luxembourg or Guernsey.

Arnaud Montebourg, who was promoted to economy minister in a government reshuffle this week, publicly attacked Altice's bid and Drahi himself last month.

"Mr Drahi will have to repatriate all of his possessions and assets to Paris, to France," the minister told Europe 1 radio.

Numericable, which is registered in France and is quoted on the Paris stock exchange, already has government contracts.

Vivendi also said the decision to sell to Numericable puts an end to plans to float SFR on the stock market.

The bidding war over SFR was just one of a number of deals being done in the European telecoms sector as firms try to ensure they have both mobile and home networks to offer clients one stop service.