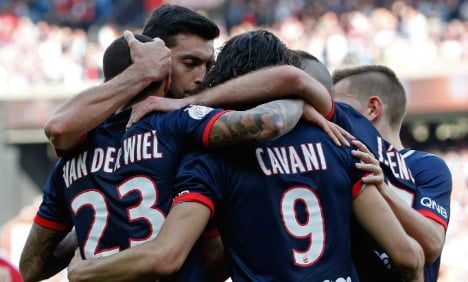 Laurent Blanc's in form side carry a 3-1 advantage to Stamford Bridge against Jose Mourinho's men, and maximum points at a sunbathed Parc des Princes guaranteed them Champions League football for next season.

Third-placed Lille extended their lead over idle Saint-Etienne to six points as they chalked up a key 2-1 win at Toulouse despite finishing the match with nine men.

Nolan Roux put the northern club in front after 26 minutes before Ivory Coast striker Salomon Kalou scored his second goal in straight weeks, this time from the penalty spot just before half-time.

The game was a bitter affair with Franck Beira and Pape Ndiaye Souare both sent off with 22 minutes left following a row but despite Serge Aurier pulling a late goal back for the home side, Lille held on.

Earlier in Paris, despite the absence of injured top scorer Zlatan Ibrahimovic, who will miss the London tie, Edinson Cavani picked up the slack with a 43rd minute opener before the visitors collapsed after the break.

French-born Algerian international Aissa Mandi was the unfortunate victim of two own goals, the first three minutes after the restart and a second with time running out.

Blanc said: "Like any game coming before the Champions League, this one before we go to Chelsea wasn't easy to prepare for.

"But for the moment we were able to forget about Chelsea and play well."

The three points not only extends PSG's lead at the top of Ligue 1 to 12 points over Monaco, who host Nantes on Sunday, but also lifts them an insurmountable 19 points above third-placed Lille, who have six matches left.

The top two teams in Ligue 1 advance directly to the 2014-15 Champions League group stages while the third must negotiate qualifying.

With domestic duties well under control, Blanc can now concentrate on the showdown in west London as PSG chase a place in the semi-finals for the first time since their solitary appearance back in 1995.

A second straight French title under Qatari ownership appears assured and they are also well on track to better Lyon's record of 84 points achieved in 2005-06.

"We are going to be champions, but we're not there yet," stated Blanc.

Elsewhere on Saturday, Montpellier edged Guingamp 2-1, relegation threatened Sochaux threw away two crucial points as they wasted a 2-0 lead at Bastia before settling for a 2-2 draw and Bordeaux and Rennes also battled to a 2-2 draw at the Chaban-Delmas stadium.

Finally, Daniel Weiss salvaged a point for lower table Evian with a 70th minute equaliser at Lorient in a match that finished 1-1.

On Sunday, Saint-Etienne will be fully aware that only a win at home to Nice will keep them in touch with Lille in the battle for third in the early kickoff.

The other Sunday fixture sees fifth-placed Lyon looking for maximum away points at third-from-bottom Valenciennes in a bid to rekindle their charge for a European spot.