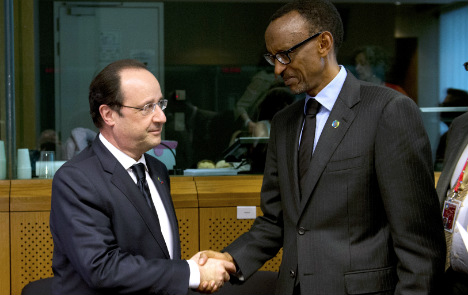 Foreign ministry spokesman Romain Nadal said France was "surprised" by Kagame's accusation, which went against reconciliation efforts between the two countries, and announced that Justice Minister Christiane Taubira would not attend Monday's commemorations in Kigali.

"France regrets that it cannot take part in the 20th anniversary commemorations for the genocide," he said.

Speaking to the weekly Jeune Afrique, Kagame denounced the "direct role of Belgium and France in the political preparation for the genocide".

He also accused French soldiers who took part in a military humanitarian mission in the south of the former Belgian colony of being both accomplices and "actors" in the bloodbath.

The interview was to be published Sunday as Rwanda prepares to mark the 20th anniversary of the atrocities that claimed at least 800,000 lives, mainly of minority Tutsis.

Paris has repeatedly denied the accusations and insisted that French forces had striven to protect civilians.

Kagame's FPR rebels overthrew the Hutu-led administration, and his party still controls the government, but many of those accused of the worst crimes of the war escaped, allegedly under the cover of the French military mission.

In 2008, a report by Rwanda's Mucyo commission of inquiry concluded that France had trained the militias that carried out killings and French troops had taken part in massacres. It accused 13 politicians and 20 officers by name.

"Twenty years later, the only thing you can say against them (the French) in their eyes is they didn't do enough to save lives during the genocide," Kagame told Jeune Afrique.

"That's a fact, but it hides the main point: the direct role of Belgium and France in the political preparation of the genocide and the participation of the latter in its very execution," Kagame said.

Kagame's assertions come as relations between Kigali and Paris — which were completely frozen from 2006 to 2009 — have improved, notably since France last month, in a landmark ruling, sentenced former Rwandan army captain Pascal Simbikangwa to 25 years in prison for his role in the massacre.

Kagame was however scathing about the Simbikangwa sentence.

"We'll see what becomes of this sentence on appeal," he said.

"I don't think it is a particularly positive development," he said. "For one criminal condemned 20 years on, how many criminals has the French justice system conjured away? They don't take us in with their little game. This sentence is made out to be a gesture, almost like a favour that France has accorded Rwanda, while it is France's role in the genocide that should be being examined."

Alain Juppé, who was French foreign minister in 1994, called it "intolerable" that France would be considered responsible for the genocide.

"I call on the French president and government to defend without ambiguity the honour of France, its army and its diplomats," Juppé wrote in his blog published Saturday night.

In 2004, on the 10th anniversary of the genocide, Kagame lashed out at France in his commemoration speech at Amahoro Stadium, saying that Paris knew that the ethnic Hutu government, the army and militia were preparing the genocide.

Renaud Muselier, then secretary of state for foreign affairs who was leading the French delegation in 2004, cut short his visit after the ceremony.

In Jeune Afrique Kagame also got in a dig at Belgian Foreign Minister Didier Reynders.

"I think he has committed a number of errors," Kagame said, "notably by associating himself with anti-Rwandan manoeuvres carried out from Tanzania."

"I feel that his position lacks balance, for subjective reasons of which I know nothing."'

When contacted by AFP, Reynders declined to react to Kagame's comments.

Relations between Rwanda and Tanzania have been strained for the better part of a year ever since Tanzania urged Rwanda to negotiate with a group of Rwandan Hutu rebels operating in the Democratic Republic of Congo.

Kigali said such a demand was unacceptable as some of the rebels were among the perpetrators of the genocide.