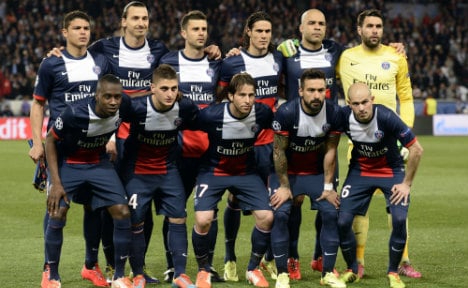 The Canal Plus cable television broadcaster made the biggest offer to secure the right to the first choice of the two best Ligue 1 matches each week.

"I had wanted to put the French championship in the top three in Europe," said LFP president Frederic Thieriez, who added that the figure was below but close to what the league had sought.

"I would have liked more because I have big ambitions for French football, but the market has spoken," he added.

BeIn Sports, a Qatari-backed cable broadcaster, was the second highest bidder. None of the other competitors, such as Eurosport or telecoms firm Orange, won any television rights.

The auction put France in fourth place in the European television rights league — ahead of Germany (€675m), but behind Spain (€750m), Italy (€960m) and especially England's Premier League, which earns a massive €1.7 billion a year.

The LFP had set a reserve price above the €726 million announced, but it was not immediately revealed how much they wanted.

Thiriez said only that the offers by Canal Plus and BeIn Sport were "very close" with tens of millions of euros between them.

According to sources close to negotiations, Canal Plus will increase payments from their current €420 million a year to about €550 million.

BeIn has been paying about €150 million a year. Its new deal was not revealed.

BeIn could be saving its financial power for bids to UEFA, Europe's governing body, for the 2015-2018 rights to the Champions League, which have to be handed in on Monday, analysts said.

Despite the arrival of the Qatar Investment Authority to bankroll PSG and Russian billionaire Dmitry Rybolovlev at Monaco, French clubs say they face growing financial difficulties as they battle to pay top salaries to help them compete in Europe.

While PSG are close to qualifying for the semi-finals of Europe's Champions League, other clubs are deep in debt.

The French government has put football stars in the group that will have to pay a 75 percent tax on the highest salaries. The French league estimates this will cost clubs €44 million a year.