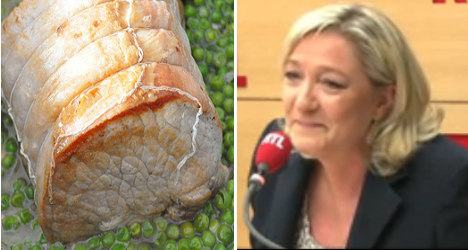 Le Pen reignited a longstanding controversy on Friday when she told a French radio station that in towns won by the party's candidates school cafeterias will no longer serve non-pork substitution meals, which generally go to Muslim and Jewish children.

"We will accept no religious requirements in the school lunch menus," Le Pen told RTL radio. "There is no reason for religion to enter into the public sphere."

Le Pen's anti-immigrant party made historic gains in last week's municipal elections when it landed 11 mayorships, which was seen as a significant electoral breakthrough for the party.

The question of France asserting its traditional values among its growing Muslim population has been a key issue for the National Front and school dinners being used as a political football in France is nothing new.

In March 2013 the school in the village of Arveyres in the Gironde region of south-west France stopped offering an alternative meal for children who did not eat pork, which is forbidden under Jewish and Muslim dietary laws.

Around 30 of the 180 children had up until then been offered a substitute meat when pork was on the menu, France's TF1 television reported.

Parents of some of those pupils affected took umbrage to the decision.

Certain parents even offered to cook meals for the children and bring them to school but their offer was dismissed by the town's mayor because it would be "logistically hard to implement and ethically shocking".

The mayor of Arveyres, Benoit Gheysens told AFP the move was being taken because of the cost of providing alternative meals, many of which went to waste.

"Often children who did not take the substitute dinner complained as well and left the pork. It distressed the staff to see how much food was wasted," Gheysens said.

The mayor, who believes the school in Arveyres is not the only one in France facing such a dilemma, has vowed that the children will get all the protein they need saying vegetables, salads and lentils will be offered when pork is on the menu.

The mayor said pork was served no more than once a week.

The issue of halal meat is often a controversial topic in France and has been used as a political football, especially when elections approach.

Le Pen the launched a fierce row before 2012’s presidential elections when she claimed all meat from abatoirs in the Paris region was prepared using Islamic halal traditions and non-Muslim consumers in the capital were being misled.