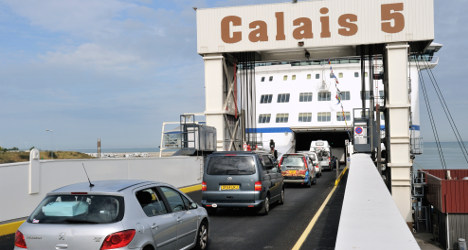 The port of Calais in France. Photo: Philippe Huguen/AFP

Ferry services between England and France were hit badly on Thursday morning after around 70 to 80 dock workers and crane drivers called a wild-cat strike, blocking roads leading to the port.

Without the workers, who went on strike at midnight, it has not been possible to unload the ferries.

In a statement on its website, P&O Ferries, which operates routes between Dover and Calais, said it was running a "limited service" due to industrial action and urged travellers to rebook "non-essential" travel.

A spokewoman for P&O Ferries also told The Local that a boat had left Dover but the company was unsure if it would be able to disembark in Calais.

The company has been forced to transfer much of their tourist traffic heading from the UK to France onto Eurotunnel trains. However there is no plan to do the same for traffic heading in the opposite direction from France to the UK.

"This dispute is between the CGT union and its members and the port authorities," said the spokeswoman. "We are hoping the boats will be able to disembark in Calais but if not they will have to return to Dover. It depends on whether there will be enough staff on duty to unload the ships."

Two other boats, the Pride of Kent and the Spirit of France were due to leave Dover this morning, but it was unsure whether they too would be able to disembark in Calais. P&O Ferries say check-in for tourists at the port of Calais is open but motorists are unlikely to make it through the traffic jams on time.

Port authorities said there were disruptions at the port but some arrivals and departures had resumed in mid-morning.

The walk-out began at midnight, according to the Le Figaro, when dock workers became angry when a firm brought in private contractors to unload a ship.

The strike is set to continue for 24 hours unless called off. The local administrative tribunal said it had received a request from regional authorities for a court order ending the strike.

There are reports of long delays on both the A16 and A26 motorways leading to Calais with numerous school buses making their way back to the UK caught up in the traffic chaos.

Local newspaper La Voix du Nord reported that French firefighters had to come to the rescue of a bus full of British school children, who were stuck the jams.

Some of the pupils were unwell and others desperate for the toilet. In the end police were called into help the bus exit the jam and head towards the Channel Tunnel rail link.

Authorities in France have also had to take control of several truck loads of animals, who were suffering from dehydration after being stuck in traffic jams for hours.

Alain Merveillie from the CGT union complained that the regional authorities had asked a company to bring in contracted workers to unload a boat, was unnacceptable given that “there is not much work for dockers and crane operators anyway and in a region where there is 18 percent unemployment.”

“They don’t understand that this would create a precedent. We hope they will call us to resolve the situation soon,” Merville told La Voix du Nord.

In a statement on its website, P&O Ferries said it was running a "limited service" due to industrial action and urged travellers to rebook "non-essential" travel.

Have you been affected by the strike? Lets us know at [email protected]