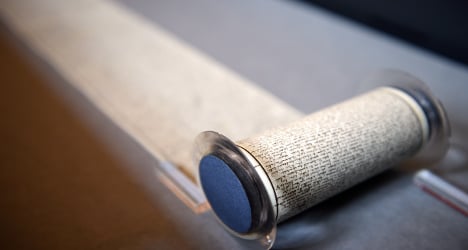 After decades of struggle a Marquis de Sade manuscript is back in France. Photo: Martin Bureau/AFP

Sade's original scroll of the novel on sexual depravity, murder and paedophilia "The 120 Days of Sodom" was returned to France following decades of legal wrangling over a work the author called "the most impure tale that has ever been told since our world began."

The 12-metre (39 foot) long scroll- first discovered in a hiding spot in a cell at Paris's Bastille prison in 1789 – will go on display in the city from September to mark the bicentenary of the infamous eighteenth century nobleman's death.

After narrowly surviving the Bastille's destruction, the book has continued to lead an odd and interesting existence. It has allegedly been sold, hidden and its ownership has long been disputed in lawsuits.

But now, current owner Gerard Lheritier, president and founder of Aristophil, a firm specialising in rare manuscripts, spent €7 million on the documents and brought it to France so that it can go on display to the public at Lheritier's private Museum of Letters and Manuscripts.

Lheritier said he would one day like to see the manuscript in the hands of the National Library of France.

"I had proposed keeping the scroll for five years and then gifting to the library but the Ministry of Culture has not acted on this," he told AFP.

Described by Sade as "the most impure tale that has ever been told since our world began", the novel was published in Germany in 1904 after being acquired by a German psychiatrist.

The draft scroll was then bought in 1929 by the husband of Marie-Laure de Noailles, a direct descendant of Sade.

But after it was subsequently stolen, smuggled into Switzerland and resold to Swiss erotica collector Gerard Nordmann, a Swiss court ruled in 1998 that the Noailles family had no claim to it as it had been bought in good faith.

The scroll was put on display for the first time at the Bodmer Foundation near Geneva in 2004.