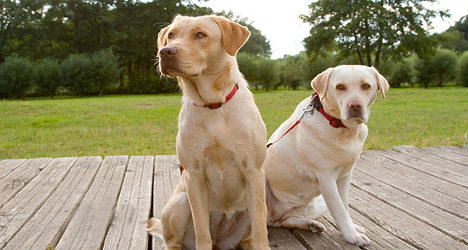 Dogs have again been called into French court to testify in a murder case. Photo: Az1172/Flickr

No one could accuse a judge in the French city of Tours of not being willing to think outside the box in order to solve a murder.

During a recent preliminary hearing the judge called a nine-year-old Labrador named Tango to the witness stand in an attempt to confirm the allegations against his master’s presumed killer, RTL radio reported.

The judge ordered the suspect to threaten the canine with a bat, with the idea being that Tango’s reactions could be used to identify or rule out the suspect. And in a nod to the scientific method of keeping tests fair, a second dog named Norman, of the same age and breed as Tango, was brought in to serve as the 'control group'.

“So if Tango lifted his right paw, moved his mouth or his tail, is he recognizing my client or not?’ Lafarge told RTL. “I find it very troubling for the French legal system. If a judge ignores the demands of reason and surrounds himself with experts who are unreasonable, well the system becomes very dangerous.”

The experiment ended up being a total failure and Tango and Norman were allowed to return to their dogs’ lives.

As absurd as it all sounds this is not a French court's first foray into canine testimony.

Only last month a vet was asked by a court in Paris to give his expert analysis of a dalmatian’s physical reactions, when the dog shown the faces of two murder suspects. Based on the dog's reactions the vet told the court it was likely the pair were responsible for the murder of the pooch’s owner.

A veterinary behaviorist, writing for the French magazine Nouvel Observateur, slammed the exercise as totally illegitimate.

“This expertise plays on popular beliefs, but has no scientific foundation,” Jacques Cordel wrote. “However, ethology (the study of animal behaviour) is real science, it’s not a joke.”

Perhaps both judges were moved to allow canine witnesses after one of their colleagues did so during a 2008 investigation into a suspicious death.

A pooch named "Scooby" was called into a court and “barked furiously” when shown a possible suspect, British paper The Telegraph reported.